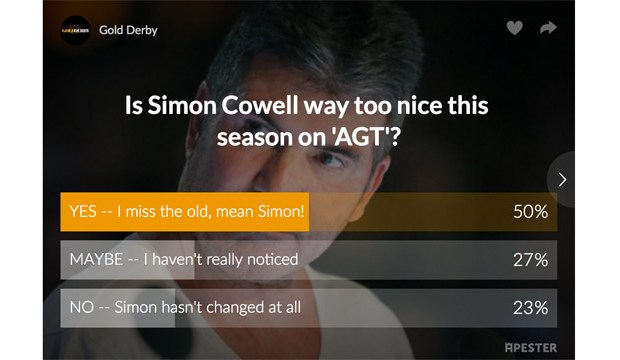 In our recent poll that asked whether Simon Cowell is too nice on the current season of “America’s Got Talent,” a whopping 50% of fans voted that they miss the mean and nasty Cowell that we first met back in the early days of “American Idol.” As our writer Kevin Jacobsen has noticed, “The media mogul has fully embraced his softer side by heaping praise on heart-warming acts while not being too harsh on some of the rougher acts. And we’re not sure we’re okay with that.” What do YOU think, “AGT” fans? Let us know by sounding off down in the comments section below.

While exactly half of the poll respondents agreed that Cowell is too nice on Season 12 of “America’s Got Talent,” 23% claimed that he hasn’t changed at all while 27% admitted that they haven’t really noticed either way. Cowell shot to infamy when he judged “American Idol” from 2002 to 2010 thanks to his acerbic, take-no-prisoners attitude. His honest and sometimes hurtful critiques of the young singers often prompted discussions about whether he was being too hostile.

In one cringe-inducing moment from the breakout first season of “American Idol,” Cowell proclaimed live on air that “losers” were making it through based on the sympathy vote, to which fellow judges Paula Abdul and Randy Jackson fought back. (Watch the flashback video below.) There’s been no sign of this version of Cowell during the 2017 edition of “America’s Got Talent.” Instead, he often champions the acts and fights for them to continue on in the competition.

Many “Americas Got Talent” fans like you expressed their own opinions on whether Cowell — who also serves as a producer on the NBC reality TV show — is too nice this season. See some of their colorful responses below:

Eric Hanson: “Very simple, while ‘American Idol’ showed a good amount of bad singers, ‘AGT’ does the opposite, shows mostly good acts, and few bad. Hence, if ‘AGT’ showed all the bad acts that auditioned, we would see a very mean and grumpy Simon.”

Mary Ellen Lanigan: “He still can pick the talent out, however! Yes, he has simmered down. Got to admit I miss the MEAN Simon!”

Shanklin: “Hated him before. Takes a lot of guts to get up there and try. And trying is what it’s all about. To try and fail is one thing, to have someone be an a**h*** about it in front of an audience is another. You may define meanness as a ‘dose of reality’ but it’s not. It’s just meanness.”

Nethara: “I think Simon was nicer but he make A LOT of mistakes. He said NO to those acrobat people. They were amazing! He call them stupid!”

Henry: “Personal opinion: Cowell is nothing but an insensitive boor with a self-inflated ego and a bank account. He barely puts clothes on to come to the show.”