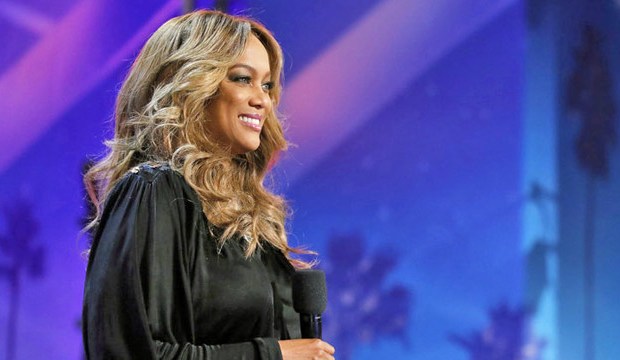 Last month we ran a poll asking whether Nick Cannon or Tyra Banks is your favorite “America’s Got Talent” host, and when we reported the results — 85% for Cannon and 15% for Banks — people really started attacking Banks in the comments section. While most responses were from fans who simply missed seeing Cannon on the show, others took the opportunity to cyberbully Banks for her looks and personality. To those haters we say, “Lay off Tyra!”

Cannon hosted “AGT” for eight seasons (2009-2016) while Banks has so far only overseen the auditions, so it’s a bit strange to see so much vitriol directed toward her. We get it: You’re sad Cannon is gone and you wish that he never parted ways with the reality TV show. But are people so furious that they’re not even willing to give Banks an honest chance?

Season 12 of “AGT” is still airing its audition rounds (which continue July 11), so fans have yet to see how Banks will do during the all-important live shows. Banks began her career as a model and actress before she went on to create, judge and host the competition program “America’s Next Top Model” for more than a decade. So she clearly has the experience needed to host “Americas Got Talent.”

Yes, we miss Cannon too, but we’re willing to give Banks a shot. Why aren’t you? Below, see just a few of the fan comments from last week’s article written by people on both sides of the debate:

Linda: “She always has to show herself, making the show about HER! It is about the contestants! Bring back Nick! He was great.”

Edna moore: “How do you bring back someone that quit. Everyone is just use to Mr. Cannon. I found Tyra to be very charming and sweet.”

Christine Shaw: “Please bring Nick back he was perfect for the show!!!! Tyra Banks is just so focused on every one noticing her that it has become very annoying!!!”

Gerb Seewald: “Nick, tried to steal the show most of the time. The is about the performers not Nick Cannon. Tyra Banks shows compassion for the performers, much better host.”

Nancy Smith: “I think Nick Canon should come back he was hilarious and he made the show. Tyra Banks is good but she’s not meant to do this. Nick Nick Nick.”

Ann meeks: “Bring Nick back. Tyra is so stiff and act and dress like the top model. All about ‘look at me.’ I vote for Nick 100 times over.”