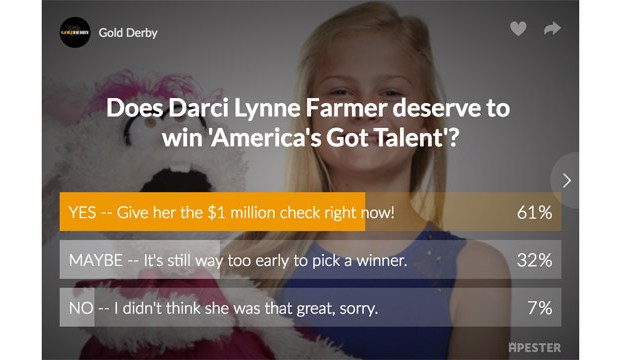 “Give her the $1 million check right now!” That’s what a whopping 61% of poll respondents said about “America’s Got Talent” child ventriloquist Darci Lynne Farmer, whose viral act has taken the country by storm. In our recent poll that asked whether Farmer deserves to win the prize, 32% voted that it’s still too early to pick a winner, while 7% went the negative route by saying that Farmer isn’t even that great to begin with.

Hold on, are we all getting ahead of ourselves? After all, NBC’s long-running reality TV show is still in the audition rounds (which return on July 11 after taking off the 4th of July) and we still haven’t seen all of the potential contenders. However, Farmer’s popularity and talent have kept her in the water cooler discussion since her audition was first shown to TV audiences on May 30, suggesting she has staying power.

Farmer is one of four “AGT” acts so far to earn the coveted Golden Buzzer, sending her straight through to the live rounds. Judge Mel B hit her buzzer for the 12-year-old Oklahoma City native, while Howie Mandel chose formerly blind singer Christian Guardino, Simon Cowell picked deaf singer Mandy Harvey and host Tyra Banks opted for neon dance group Light Balance. Will one of these Golden Buzzer acts join the complete “AGT” winners list, or will it be someone else entirely?

Farmer said during her audition that she began working with her puppet Petunia as a way to overcome her shyness as a child. It seems to have worked, as there was no trace of nerves when she sang “Summertime” for the judges — a performance that has since been viewed hundreds of millions of times. When Farmer returns in the live rounds of “Americas Got Talent,” will she bring out Petunia again or perhaps entertain the audience with a brand new puppet?