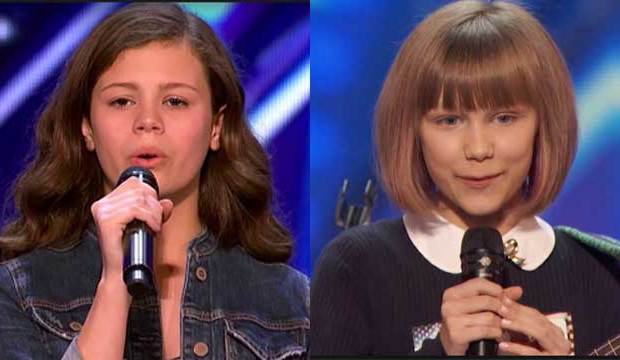 On the July 11 episode of “America’s Got Talent,” 13-year-old singer Angelina Green earned a Golden Buzzer from Heidi Klum for her heartfelt performance of The Pretenders‘ classic “I’ll Stand By You.” The other three judges — Mel B, Simon Cowell and Howie Mandel — were equally enthusiastic about this teen talent. Before she auditioned, Green broke their hearts as told them of being abandoned by her father and being supported by her mother who stood in the wings.

After she sang, Mel B advised her,”“I can feel this is very overwhelming for you, but when you watch this back, you’re gonna know how much of an amazing job you just did. Mandel praised her performance. “If you move somebody emotionally, I think that’s the best thing music can do and I think that’s what you just did.” And Cowell admitted, “You’ve made my goosebumps have goosebumps. The truth is, we don’t get many people like you for a reason because they’re hard to find. Genuinely I’m excited because I think you’re so talented.”

But is Green as talented as Grace VanderWaal, who was only 12 years old when she won Season 11 of “America’s Got Talent” last September. That talented singer/songwriter often accompanied herself on the ukulele as she won over first the judges and then viewers with her stripped-down style of singing. In December, she released her first EP, “Perfectly Imperfect.” And in May, she picked up the Best New Artist prize at the Radio Disney Music Awards.

Mandel hit the Golden Buzzer for her after she performed an original song, “I Don’t Know My Name.” For the quarter-finals, she did another track that she wrote, “Beautiful Thing,” which she dedicated to her sister. She sailed through the semi-finals with her own tune, “Light the Sky,” and then won at the finale with “Clay,” a heartfelt song she wrote about the effects of bullying. To date, these four performance videos have drawn more than 80 million views on YouTube.

Who do you think is the better singer: Green or VanderWaal? Vote in our poll below and then sound off in the comments section.