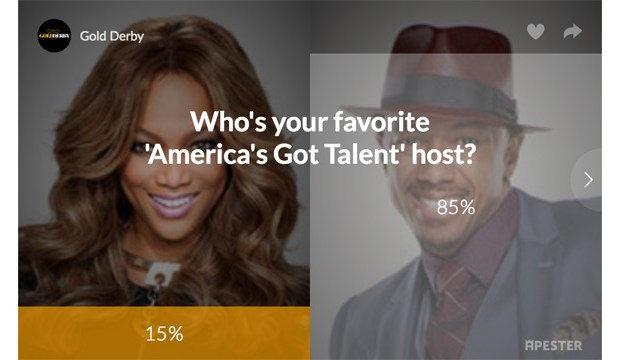 “America’s Got Talent” fans have spoken loud and clear: Bring back Nick Cannon! In our recent poll that asked who’s the better “AGT” host between former star Cannon and newcomer Tyra Banks, a whopping 85% of fans voted for Cannon while only 15% of poll respondents opted for Banks. Do you agree with those poll results? Be sure to sound off down in the comments section below.

After eight years as ringleader (2009-2016), Cannon recently decided to part ways with NBC’s reality TV show, so Banks joined up with the program for this summer’s current 12th season. “AGT” is still airing its audition rounds (which continue July 11), so fans have yet to see how Banks will do during the all-important live shows. Are people pre-judging her unfairly, or do they simply miss Cannon?

Longtime fans of “America’s Got Talent” will recall that Regis Philbin hosted the inaugural season back in 2006, while Jerry Springer emceed the second and third seasons from 2007 to 2008. Cannon hosted from Season 4 to Season 11, which makes Banks the fourth emcee. It’s rare for a successful network reality show to go through so many hosts. Just look at fellow NBC program “The Voice,” which has been hosted by Carson Daly for all 12 seasons (and counting).

Prior to “Americas Got Talent,” Cannon was known as a celebrity dancer and actor in programs like “All That,” “The Nick Cannon Show” and “Wild ‘N Out.” Banks began her career as a model when she was just a teenager, then soon moved over to the acting world. Of course, Banks really made an impact on pop culture in 2003 when she created, hosted and judged the competition program “America’s Next Top Model” for more than a decade.