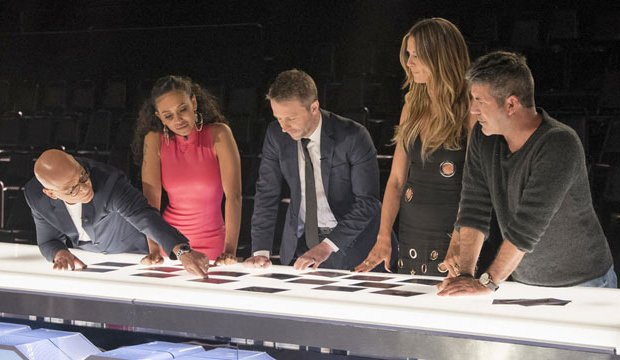 Monday night, Season 12 of “America’s Got Talent” reached the final stage of the competition before the live shows begin. Twenty performers presented their act in front of series judges Simon Cowell, Heidi Klum, Howie Mandel and Mel B as well as guest judge comedian Chris Hardwick. In the judges’ cut phase of the show, 20 acts perform in front of the panel, needing the approval of the judges in order to be one of only seven acts that will advance to the next round. Hardwick was in a special position, having his own Golden Buzzer to overrule the other judges with and send his favorite act straight through.

Below, read our “Americas Got Talent” 2017 recap of the 20 acts in the order in which they were showcased on Tuesday’s episode. Who are you most excited to see perform in the live shows? Be sure to sound off with your thoughts down in the comments section.

Sara Carson and Hero: Simon challenged Sara by asking her what she’s bringing to the table for this performance in order to improve her act from the mixed reactions she received from the panel at the auditions. Using more props this time than last, Sara and her dog Hero put on an entertaining show of tricks, jumps, choreography and balancing that finally won over Howie and Heidi who weren’t as impressed last time.

The Baker Family: Chris was excited to see this bluegrass quartet and wasn’t let down–he told them he loved it and it made him feel like he was down in the south eating good ol’ southern cooking.

Mariachi Nuevo Santader: Mel B told them that the audition “couldn’t have gone any better” for this group that sang an NSYNC hit for their performance.

The Masqueraders: This trio of older gentleman who have been singing together for most of their lives wowed again with a smooth and soulful ballad showcasing their harmonizing and passion for the genre. Chris expressed deep appreciation for the group and Simon echoed it, going as far as to say that he thinks America will fall in love with them.

Eric Jennifer: Simon wasn’t too thrilled to have to sit through another comedy act from Eric considering how not funny he finds him as well as the incessant “Make some noise” hooks to his routine. Both he and Heidi slammed their red buzzers to express their disapproval.

Harrison Greenbaum: Following Eric, Harrison gave a better comedy set, getting laughs from everyone on the panel and a standing ovation from half the panel. Even still, Heidi admitted that it really wasn’t her taste.

Dancing Pumpkin Man: Chris prefaced Pumpkin Man’s performance by revealing that he recognizes him as an internet sensation that gets million of hits on his YouTube channel. But even with Chris’ support and a jewel-studded spandex outfit, Pumpkin Man lost Heidi’s approval who hit her red buzzer.

Tom London: Tom’s style of magic is to combine technology and magic in order to create a new kind of magic that speaks to younger generations. Once again he used spontaneous questions and answers from the audience and judges with a mobile phone as a prop to do predictive magic. Simon’s only bit of advice was for him to practice being a better performer.

Eric Jones: The highlight of Eric’s magic trick was when he answered Simon’s criticism of his audition being “not dynamic” by curating a specific trick for him. First he made a playing card with Chris’ signature on it vanish at the touch of a hammer which he later used to smash Simon’s red buzzer, revealing the same card hidden inside of it. Needless to say, Simon changed his tune this time around and called Eric “brilliant.”

Angelica Hale: Though she was admittedly more nervous this time than when she sang “Rise Up” for her audition, Angelica kept pace with the standout performance by slaying “Girl on Fire” by Alicia Keys this time around. Amidst cheers from the crowd for Chris to give her his Golden Buzzer, the judges reaped more praise upon Angelica before Chris declared her “the chosen one” and hit his Golden Buzzer, sending her to the lives.

Danylo and Oskar: Father and son gymnast duo, Danylo and Oskar impressed Chris and Mel B with a daring balancing act despite one minor hiccup in their act.

Lera and Nika Tomanova: In another dangerous feat, these young sisters won over Heidi and Simon after spinning around the stage on a wire 25 feet in the air without a net.

Yosein Chi: The dramatic music during Yosein’s balance routine was the perfect score to hear behind the exclamations of the judges panel as he first balanced atop a decanter on only his head and later did a handstand, fake fall and save over a row of daggers.

Darcy Callus: Keyboardist and singer, Darcy sang a heartfelt rendition of the Queen classic “Somebody to Love” to the acclaim of the audience and judges, especially Mel B.

Carlos De Antonis: Carlos’ opera performance once again made Heidi swoon and though Simon wasn’t completely won over, he congratulated Carlos on his winning personality.

Canion Shijirbat: Canion’s visual aid dance routine failed to impress Heidi and Simon both of whom hit their red buzzers and told him that they’ve seen his style of act done better before.

Just Jerk: This South Korean dance crew hit every pop and lock move as hard this time as they did in their audition. The synchronization and precision with which they move earned a full-panel standing ovation from the judges and an eruption of cheers from the crowd.

Maw Kitty: Cabaret singer and dancer, Maw may have been too close for comfort for the judges when she approached their dais to serenade Howie and Simon. Mel B and Howie both hit their red buzzers, saying that this routine wasn’t as good as her initial audition.

The Singing Trump: On stage with secret service backup dancers, The Singing Trump performed an engaging melody of The Backstreet Boys hits. The inclusion of more exciting choreo this time helped earn him a roaring ovation from everyone in the room, including Mel B who gave him a harsh disapproval during his first audition.

Demian Aditya: In order for to complete his act, host Tyra Banks, the judges and the audience all joined escape artist Demian outside so that he could literally bury himself alive.Wrapped in a chain locked behind his back and handcuffed, Demian laid down in a wooden box 10 feet deep with only a minute and a half to escape while dirt was shoveled on top of him. After the camera in the box went dark, time ran out and with his wife screaming for someone to save him, one of the men shoveling dirt onto the box removed a cap to reveal himself as Demian, once again stunning the judges and the crowd.

At the end of the episode the judges deliberated on the 20 acts, tasked with narrowing the field down to only six more acts that would join the Golden Buzzer 2017 picks in the live shows. They chose: soul trio The Masqueraders, dog act Sara Carson and Hero, impersonator The Singing Trump, South Korean dance crew Just Jerk, escape artist Demian Aditya and magician Eric Jones. Do you agree with their choices? Sound off below.