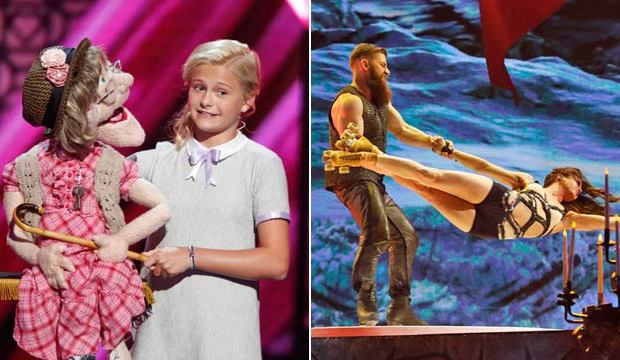 The live shows of “America’s Got Talent” 2017 continued this week with 11 acts performing Tuesday night during the Semifinals 1 episode. “AGT” viewers voted overnight for their favorites, and Wednesday’s live results episode revealed which five acts advanced to the Finals and which six acts were eliminated. Last season’s runners-up The Clairvoyants were also on hand for special live performances at the Dolby Theatre in Hollywood.

In the event you missed the episode (or simply didn’t want to sit through an hour of reality TV padding), you can check out our minute-by-minute recap of the “Americas Got Talent” Semifinals 1 results below. Also be sure to sound off in the comments section about the night’s most shocking moments. Keep refreshing/reloading this page as we’ll be updating live.

8:02 p.m. — I love when they recap the performance night and show us behind-the-scenes footage. Like, for example, Howie telling Mel she looked like a turkey. Same!

8:04 p.m. — Ugh this recap is just reminding me how many great acts were on the stage last night. It’s going to be terrible seeing some of them eliminated. There are way more than five that deserve to advance!

8:09 p.m. — Before the results, Tyra mentions that last night there was a record amount of votes cast. The three acts up for the Dunkin Save are Chase Goehring, Eric Jones and Evie Clair–that means they polled the, in no order, the 4th, 5th and 6th highest in votes.

8:10 p.m. — First set of numbers for the Dunkin Save show that it’s a race between Chase and Evie, switching back and forth between 36% and 35% of the instant votes.

8:17 p.m. — With Greater Works and Preacher Lawson on stage, Tyra breaks the news that Preacher is the first act to make the finals, meaning Greater Works has been eliminated.

8:19 p.m. — Between Johnny Manuel and Yoli Mayor, Tyra played a trick and after telling them one was going through opened the envelope to reveal that they are both eliminated. Mean!

8:27 p.m. — While the Dunkin Save vote continues, Tyra hosts a special (pre-taped) segment called “Buzzer Buddies” where Mel and Heidi face off against Howie and Simon to determine which pair knows their partner best.

8:31 p.m. — During the game we learn that Simon’s favorite snack is tangerines and Mel’s is chips, Howie wrongly thinks Simon’s middle name is “Mon” (it’s Philip) and Heidi thinks Mel’s is “Scary” (it’s Janine), and Heidi would throw away old undies from Mel’s closet and Simon thinks Howie would throw everything out of his. In round 2, Heidi says the one thing she can’t live without is “breathing” (LOL!) and Howie can’t live without hair gel (what?!) and Simon doesn’t want to go to the sauna with Howie at 5 a.m. and Mel wants Heidi to stop singing. In a score of 3 to 2, the women win!

8:32 p.m. — Now it’s time for last season’s The Clairvoyants to stun us with their tricks once again! Howie and Mel are on stage to assist.

8:34 p.m. — Wait, they just spiritually connected Howie and Mel by making a blindfolded Howie think he was being touched when they were actually touching Mel. How did they…

8:41 p.m. — With the Dunkin Save voting now closed, Tyra brings Darci Lynne and Mike Sung to the stage to reveal that Mike is eliminated and Darci Lynne has made it to the finals.

8:44 p.m. — The last two acts to hear the results are Billy & Emily England and Sara & Hero. Based on America’s vote, the last act to poll in the top 3 is Sara & Hero! That means the daring skaters Billy & Emily are eliminated. I guess America likes dogs more than beards! (Secret: I don’t!)

8:50 p.m. — The act that earned the Dunkin Save based on votes cast during the first 30 minutes of the results show is Evie! Wow that had to have been close.

8:52 p.m. — To decide the fifth and final act to reach the finals, the judges will cast their votes between Chase and Eric.

9:00 p.m. — It’s down to Howie (it’s always down to Howie!) and he votes for Chase which means he’s through and Eric is sent home.

Reminder that next week’s performance show is on Tuesday night at 9 p.m., one hour later than normal. Do you think the best five acts advanced? If not, let me know in the comments who you think should have made the finals and also who you think will win!

Here are the bullet points from our “America’s Got Talent” Semifinals 1 results recap:

'America's Got Talent' 15th Anniversary Special recap: Which act tops the list of 15 Most Viral Moments…

Which 'America's Got Talent' eliminated act was most robbed in Judge Cuts: Ninja Twins, Brothers Gage…

'America's Got Talent' Judge Cuts recap: Which 10 acts from the auditions perform again for a chance to…

'America's Got Talent' viewers rank Season 15's Golden Buzzers from first to last: Do YOU…

'America's Got Talent' episode 8 recap: Rewatch your favorite acts in 'Best of the Auditions'…