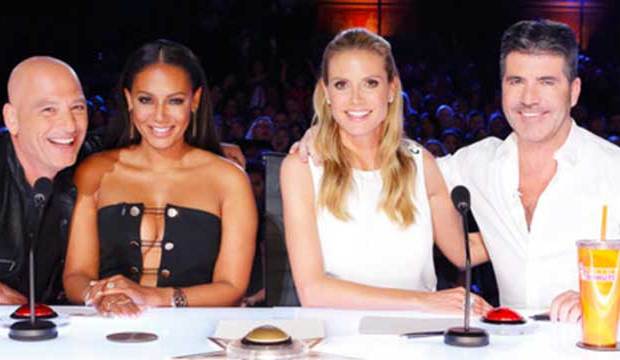 Last year’s line-up of judges on “America’s Got Talent” returned for season 12, which is airing on NBC this summer. For “AGT” executive producer Simon Cowell, it is season two on the panel while both Mel B and Heidi Klum are in place for a fifth year. The veteran of the bunch is Howie Mandel who is back for an eighth year in a row.

Which one of these “AGT” fearsome foursome is your favorite? Take a read of their official NBC bios and then vote in our poll. And be sure to sound off on those among the panel that you love and love to hate in the comments section.

Mel B
Melanie Brown, best known to audiences as the iconic Mel B of the Spice Girls, is a chart-topping music artist, actress, author, television personality and groundbreaking entrepreneur. Mel B has found a home on television across the globe – and she made television history when she joined “The X Factor” in the U.K. as a judge sitting next to Simon Cowell, Cheryl Cole and Louis Walsh. It’s her third number-one show on three different continents, along with a stint as coach on Australian spinoff “The Voice Kids.” The versatile talent competed on Season 5 of the ABC hit series “Dancing with the Stars,” where she came in second place with her partner, Maksim Chmerkovskiy.

Simon Cowell
Simon Cowell is a record company executive, television and film producer and global TV icon. Known for his eye for talent and candid verdicts, Cowell has completely transformed popular culture through his entertainment enterprise. Cowell’s joint venture with Sony Music, titled Syco Entertainment, is one of the world’s leading global music, film and TV production companies and is responsible for some of the most successful global music and TV franchises. Artists signed to Syco Music include One Direction, Little Mix, Susan Boyle, Ella Henderson, Il Divo, Labrinth, Fifth Harmony, Fleur East and Collabro.

Heidi Klum
Heid Klum is a major star in the fashion and entertainment world. Having established herself as a top model, making great impact for such clients as Victoria’s Secret and appearing on the covers of pop-culture mainstays including the Sports Illustrated swimsuit issue, Klum’s career has taken many new directions.

Howie Mandel
Mandel has remained a constant force in show business for more than 30 years. Mandel also serves as executive producer of many shows with his production company, Alevy Productions. Previously, Mandel received an Emmy Award nomination for Outstanding Host for a Reality or Reality-Competition Program for “Deal or No Deal” and a Daytime Emmy nomination for Outstanding Game Show Host for the syndicated version of the show.