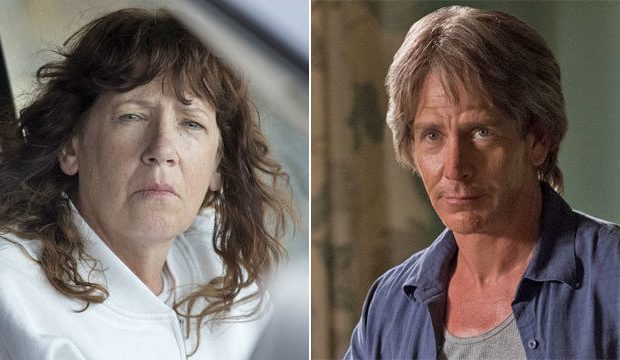 Emmy fans, we won’t blame you for getting chills if you see two ghosts floating up to the podium this year to accept their trophies. Both Ann Dowd (Best Drama Guest Actress for “The Leftovers”) and Ben Mendelsohn (Best Drama Guest Actor for “Bloodline”) are nominated at the 2017 Emmys for playing dead characters who returned to haunt the final seasons of their TV shows. And both stars have realistic shots of winning.

Longtime character actress Dowd portrays Patti Levin on HBO’s “The Leftovers,” a role that fans thought ended back in Season 1 when she was murdered by Justin Theroux‘s Kevin Garvey. But Patti continued popping up in episodes to haunt Kevin, including in the recently departed final season where she returned to great fanfare in a dream sequence in which Patti now appeared as the Secretary of Defense.

Dowd is in second place to win Best Drama Guest Actress, according to Gold Derby’s racetrack odds, behind only Alexis Bledel (“The Handmaid’s Tale”). Ironically, Bledel and Dowd co-star together on that Hulu hit where Dowd has a second Emmy nom in the supporting race for playing Aunt Lydia. For “The Leftovers,” Dowd has submitted “The Most Powerful Man In The World (And His Identical Twin Brother)” for awards consideration. See Dowd’s pros and cons for winning.

Just last year Mendelsohn won the supporting Emmy for the dark Netflix drama, but he contends in the guest race this year because of his decreased screen time. Mendelsohn plays doomed brother Danny Rayburn on “Bloodline,” who continued getting steady work after his character’s death by appearing in flashbacks, in dreams, and in ghostly visions to haunt his murderous brother John Rayburn (Kyle Chandler).

Gold Derby has Mendelsohn in second place to win Best Drama Guest Actor, just one spot below category frontrunner Gerald McRaney (“This Is Us”). In our episode analysis of Mendelsohn’s submission “Part 32,” the penultimate hour of the series, we break down the pros and cons of whether he can win a bookend trophy to last year’s surprise Emmy triumph.