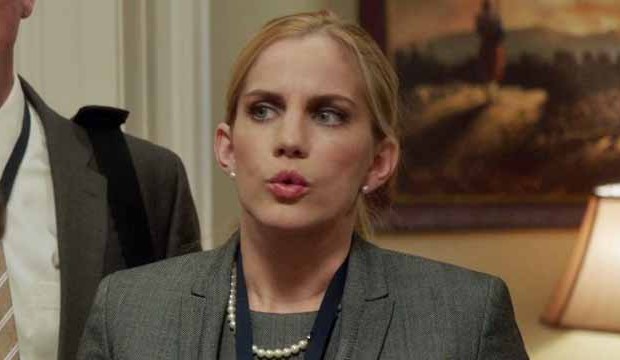 Gold Derby can exclusively reveal that Anna Chlumsky is entering the “Veep” episode “Groundbreaking” as her Emmy submission for Best Comedy Supporting Actress. This installment of the HBO program aired June 25 and was the 10th and final episode of the 6th season. In this segment, Amy Brookheimer shows former President Selina Meyer (Julia Louis-Dreyfus) a model of her proposed library and informs her it might be situated on the site of Yale’s former slave quarters. Later, Amy reveals to Dan (Reid Scott) that she is pregnant with his baby.

Kate McKinnon (“Saturday Night Live”) is the reigning champion for this category at the Emmys. For this year’s race, McKinnon and Chlumsky are back and up against “SNL” cast members Vanessa Bayer and Leslie Jones, returning nominee Judith Light (“Transparent”), and rookie contender Kathryn Hahn (“Transparent”).

Chlumsky now has her fifth consecutive Emmy nomination for this role. She has also been part of the Best TV Comedy Ensemble nomination the past four years at the Screen Actors Guild Awards.