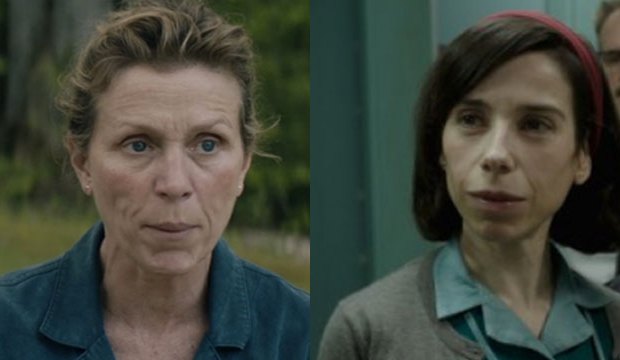 Our 23 Oscar experts from major media outlets are almost evenly divided as to who will win Best Actress: 11 are predicting that Sally Hawkins will prevail for “The Shape of Water” while nine favor Frances McDormand for “Three Billboards Outside Ebbing, Missouri.” Two give the edge to Saoirse Ronan for “Lady Bird” while one expects Kate Winslet to win for “Wonder Wheel.”

Hawkins, who lost her supporting bid four years ago for “Blue Jasmine” to “12 Years a Slave” ingenue Lupita Nyongo, has never contended in lead at the Oscars. McDormand numbers just a single Best Actress bid among her four Oscar nominations but it was the one that proved to be the winner (“Fargo,” 1996). Ronan has contended once in both lead and supporting while Winslet has racked up a whopping seven Oscar nominations (4 lead, 3 supporting) with a win with #6 for “The Reader” in 2008.

In “The Shape of Water,” which won the top prize at the Venice film festival, Hawkins plays a mute woman who communicates through sign language who gets a job cleaning a government laboratory. There she encounters a humanoid aquatic creature (Doug Jones, who played multiple creatures in Del Toro’s “Pan’s Labyrinth”) who is the subject of scientific research and testing.

McDormand headlines Martin McDonagh‘s “Three Billboards Outside Ebbing, Missouri,” another dark comedy in the style of “Fargo,” which just won the audience award at the Toronto film festival. She plays a grieving mother who tries to shame the local police chief (Woody Harrelson) into investigating the murder of her daughter. McDonagh, a Tony-nominated playwright, won the Best Live Action Short Oscar in 2004 for “Six Shooter.”

Poised to play spoiler is Ronan in “Lady Bird,” an acclaimed character study by first-time solo director Greta Gerwig. Ronan, who lost her Oscar bids for “Atonement” (2007) and “Brooklyn” (2015), embodies the title character:  Christine “Lady Bird” Macpherson, a teenager looking to spread her wings. She could have the edge as the Best Actress Oscar is usually awarded to an ingenue, unlike the Best Actor prize which is typically taken by a veteran. Indeed, a whopping 32 of the 89 Best Actress winners were in their 20s when they picked up their prizes, including last year’s winner Emma Stone (“La La Land”).

See how our experts rank Oscar contenders according to the likelihood of winning in the top eight races. Use the drop-down menus at the top of each page to see the other seven categories.