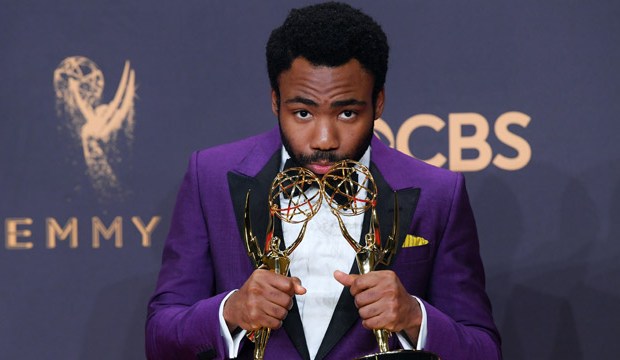 The Best Comedy Actor category at the Emmys has seen a radical change over the 2010s. The beginning of the decade was dominated by actors in broad, multicam sitcoms, exemplifying what Emmy voters find laugh-out-loud funny, while recent years have seen a shift. Jim Parsons had a stranglehold on the Comedy Actor category at the beginning of the decade, winning over and over again for his performance as socially awkward genius Sheldon Cooper on CBS’s “The Big Bang Theory.” The actor won in 2010, 2011, 2013 and 2014. Jon Cryer briefly interrupted Parsons’ streak, prevailing in 2012 for playing pitiable chiropractor Alan Harper in CBS’s “Two and Half Men.” The actor had previously competed in the supporting category, amassing six nominations and one victory there.

Things took a turn in 2015 when Parsons was snubbed and voters considered a very different kind of performance. The voters selected Jeffrey Tambor for his subtle, emotional performance as Maura Pfefferman, a transgender woman embracing her identity, in Amazon’s “Transparent.” Voters loved his performance so much they rewarded him again in 2016, even with more traditionally funny competition in the race. Then in 2017, Donald Glover won the Emmy for playing entrepreneurial music manager Earn Marks in FX’s “Atlanta” (he also took home a trophy for Best Comedy Directing). Like Tambor, Glover’s performance is not gut-busting or slapstick, suggesting voters are looking for something with more depth these days.

It is hard to argue with the strength of these four actors, but which do you consider the best of the decade? Vote in our poll below, but first let’s dive deeper into each winning performance.

Jim Parsons — “The Big Bang Theory” (2010-2011, 2013-2014)
Parsons entered an exclusive pantheon in 2014, tying the record for the most wins ever in this category alongside Michael J. Fox, Kelsey Grammar and Carroll O’Connor. Parsons’ Sheldon Cooper is typically uptight and blunt, but multiple episodes he submitted for Emmy consideration featured his character getting drunk, showing a different side to voters. This worked out for him three times, in 2010, 2013 and 2014. Oddly enough, voters decided they had enough in 2015, dropping him completely even in a field of seven nominees. Meanwhile, Sheldon Cooper has become one of the biggest, most popular sitcom characters in recent history, to the point that he now has a spinoff, “Young Sheldon,” with Iain Armitage playing Sheldon as a child.

Jon Cryer — “Two and a Half Men” (2012)
Cryer won the Best Comedy Actor Emmy in 2012, three years after snagging the Best Comedy Supporting Actor prize for the same performance. Cryer moved up to the lead category after co-star Charlie Sheen was fired from the show and replaced by Ashton Kutcher. The arrival of Kutcher’s character gave “Two and a Half Men” (and Cryer) a second wind, with Alan Harper having to adjust to life without his brother. Cryer was only nominated once in Comedy Actor before being dropped the following year, never to be nominated again.

Jeffrey Tambor — “Transparent” (2015-2016)
After six nominations with no wins for “The Larry Sanders Show” and “Arrested Development,” Tambor found Emmy glory with “Transparent.” Despite huge critical acclaim, some suspected voters might overlook his performance considering there is very little “funny” about it. While there are occasional wry jokes, the true quality of Tambor’s performance is in portraying Maura’s flaws in a straightforward, dramatic manner. Through Tambor’s two consecutive wins, voters watched Maura come clean about her gender identity, learn to adapt to presenting herself authentically to the world, and become self-obsessed while struggling to maintain relationships. Tambor earned another nomination in 2017, where he lost for the first time for this performance.

Donald Glover — “Atlanta” (2017)
As star, director, and writer on “Atlanta,” Glover did what other multi-hyphenate auteurs like Louis C.K., Aziz Ansari and Lena Dunham have yet to do, which is take home an Emmy for acting. Glover plays Earn Marks, a hustling Princeton dropout doing everything he can to follow his passions while also providing for his daughter. His performance is a far cry from the goofy antics of Troy on “Community,” taking a more understated approach. Glover became the first black actor to prevail in this category since Robert Guillaume for “Benson” in 1985.

Come fly with 'The Flight Attendant' across the years in movies

'Bridgerton' bro bound for Emmys? Jonathan Bailey is a strong bet for a nomination, according to our…