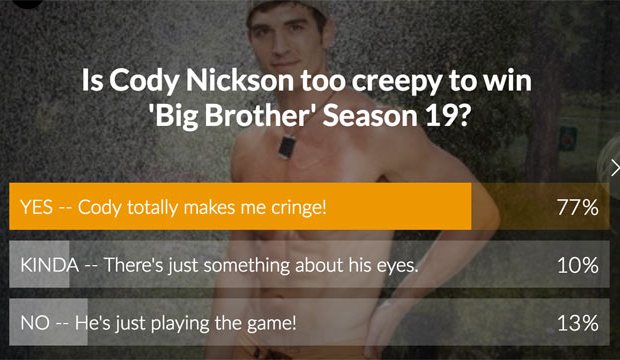 In our recent poll that asks whether ex-marine Cody Nickson is too creepy to make it to the end of “Big Brother” Season 19, a whopping 77% of readers vote “yes.” To compare, 10% of fans think that Cody is just “kinda” creepy, while 13% of supporters say “no.” The creepy debate began early on when Cody started doing strange things like staring at his fellow housemates in silence, or brushing his teeth to avoid talking with them. Which side are you on? Sound off down in the comments section.

Cody was evicted from the “Big Brother” house two weeks ago (read his exit interview), but thanks to the twist of the Battle Back Showdown he returned to the house last week. Following Thursday’s eviction of Ramses Soto, Cody is now one of the 12 remaining players in the Season 19 house. However, the houseguests have made it clear through their actions and votes that Cody and his live-in girlfriend Jessica Graf are on an island of their own making.

Throughout the first month of the game, Cody made no effort to get to know his fellow players. Instead, he betrayed his alliance at the first possible chance by turning on both Paul Abrahamian (who he didn’t like) and Christmas Abbott (who was a casuality because she’s Paul friend). Since his return to the game Cody has tried to improve his social game, even admitting to playing up his facial expressions when talking with Christmas about NASCAR.

Cody and Jessica are currently in possession of the final temptation of the season, the Halting Hex. So if this week’s Head of Household Paul decides to nominate one or both of the showmance duo for eviction, Jessica can use her power to halt the live eviction. That means both Cody and Jessica will make it at least another week in the house. But if Cody keeps us his creepy behavior, it’s unlikely he’ll earn enough jury votes to win in the end.

'Big Brother' Showmances: Where Are They Now? 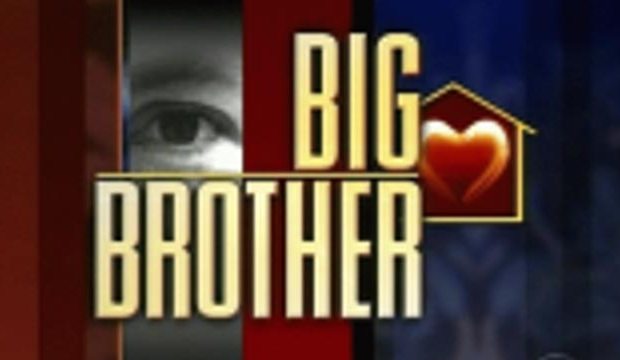