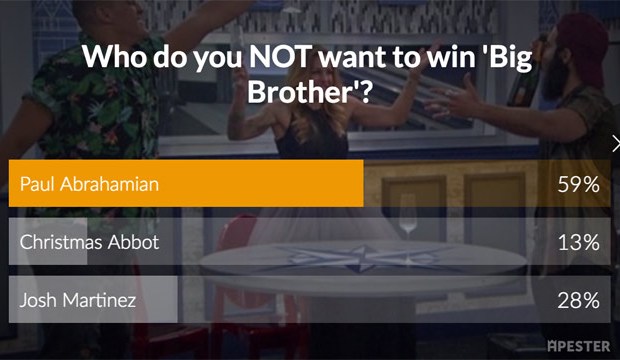 With just three players still competing to become the Season 19 “Big Brother” champ, most fans are hoping Paul Abrahamian will NOT walk away the winner. He earns a whopping 59% of the votes in our recent poll, which is more than the other two houseguests combined. Josh Martinez comes in second with 28%, followed by Christmas Abbott with just 13%. Do you agree or disagree with these poll results? Who do you want to see lose during Wednesday’s live finale? Sound off in the comments section.

Paul is certainly no stranger to coming up shy of the half-million dollar grand prize. The scheming puppet master made it all the way to the Season 18 finale before losing to Nicole Franzel. As the only returning player this summer, Paul absolutely dominated the social aspect of this season, creating alliances with nearly everyone in the house. He formed a loyal army before pitting them all against each other, allowing him to sit back as they fired shots at everyone but him. But while his fellow houseguests may have found him charming, most fans have fallen out of love with the domineering, condescending and over-the-top king of “friendship.”

Should Paul reach the final two, a conflicted jury will have to decide if they want him to win for playing a successful, manipulative game or if they would rather punish him for betraying nearly all of them. Regardless of what has been said in the jury house, it shouldn’t surprise anyone if Paul can sway their decision one last time and convince them to hand him $500,000. Never underestimate his ability to get anyone but Cody Nickson to do what he wants. But as gratifying as it would be to see his game finally crash and burn, do Christmas or Josh really deserve to win?