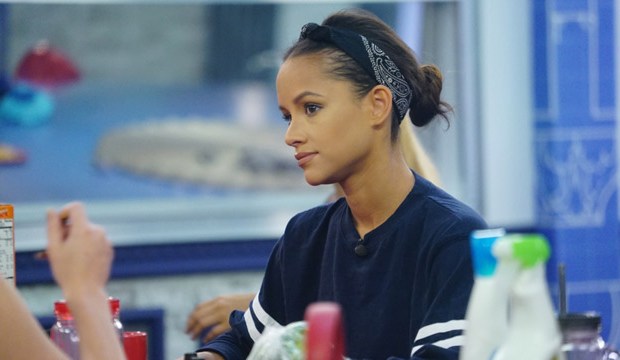 Tempers flared on another dramatic episode of “Big Brother” Wednesday night, which also included an important “Power of Veto” competition that could have altered the game. The reigning Head of Household (HOH), Alex Ow, had nominated Dominique Cooper and Jessica Graf for eviction earlier in the week. But which one was her main target? And who finally called out Paul Abrahamian for all of his sneaky moves? Find out those details, and who won this week’s Power of Veto, in our Season 19, Episode 10 recap below. Hurry — make your “Big Brother” 19 predictions for a chance to win a $100 Amazon gift certificate. It’s fun and easy, so start predicting right now.

After Cody Nickson’s eviction, it seemed easy enough to go after Jessica next, but it soon became clear that Dominique might be worth gunning for. Quickly following the nomination ceremony, Paul tried to console her, but she was not interested in hearing from him. Certain Paul and Elena were involved in her nomination, Dominique vented to Mark Jansen that the duo have been acting strange around her and she knew something was fishy. Mark then began to cry and continued to do so throughout most of the episode.

Dominique then took a bathroom break to speak in tongues to God, who promptly informed her that Paul was responsible for her being on the block. Before you get confused, it was indeed the big man in the sky who Dominique said informed her that Paul was the snake in the grass. I was not referring to any earthbound houseguests. Dominique confronted Paul and let him know that she felt he betrayed her. She asked him if he has always been honest with her, and he responded, “Yes,” which was a lie. Dominique could sense Paul was full of garbage and expressed in the diary room that she would expose him at the “right time.”

It was then time to pick players for the veto competition. Six people participate in the veto competition: the HOH, the two nominees, and three houseguests selected by random draw. Alex, Dominique and Jessica were joined by Kevin Schlehueber, Christmas Abbott, and Jason Dent. Jason pleaded with Alex to pull Jessica off the block if they won the Power of Veto (POV). Their target was Dominique, and he felt that Jessica being on the block was too risky and could backfire.

“The Temple of Temptation” was the name of the veto competition, and before it even began, Christmas was disqualified from the competition for medical reasons. No replacement player was chosen. Lame! The competition itself involved each player running across a balance beam, circling around a creepy squirrel statue, and then returning across the beam to hit a buzzer. The first player to hit the buzzer 50 times would win the POV. It was really a two-person race between Jason and Alex, but Jason ended up winning the POV. He stated earlier he intended to take Jessica off the block, but Alex was determined to convince him to keep her nominations the same.

Alex and Jason spoke to Mark in hopes he would be willing to go up on the block as a pawn, and ensure Dominique’s eviction. Mark did not feel comfortable with the idea, and also stated he would not vote to evict Dominique, who he considers his best friend in the house. Dominique then asked to speak privately with Jason, hoping to expose Paul as a snake who held control over the house. Unfortunately, Dominique is an absolute failure when it comes to saving herself. Instead of just outing Paul as the root of the problem, she refused to name names and simply told Jason there was “a snake” and he would have to figure it out. Well, Jason is too simple-minded for all of that nonsense and Dominique’s rant only hurt her more.

Dominique continued to speak in code to Alex about this “snake” in the house. I still don’t understand why she wouldn’t just say his name! But Alex was wise enough to at least figure out she meant Paul, and quickly told Paul he was being badmouthed. Paul then declared a house meeting, waking up Dominique so they could get everything out in the open. The two proceeded to get into a heated argument in front of the other houseguests, where Dominique stated Paul would be going home sooner rather than later, and Paul finally lost his cool after becoming threatened by her statements.

Before the Power of Veto ceremony, Jason and Alex continued to argue over whether or not they should pull Jessica off the block. Jason wanted Alex to pull Jessica down and put up Raven Walton. Nobody wants Raven out of the house, so her joining Dominique on the block would all but ensure Dominique’s eviction. Alex wanted to remain calm and keep the nominations the same, convinced Dominique will go home regardless. In the end, Jason chose not to use the power of veto, meaning either Dominique or Jessica will be evicted on Thursday.