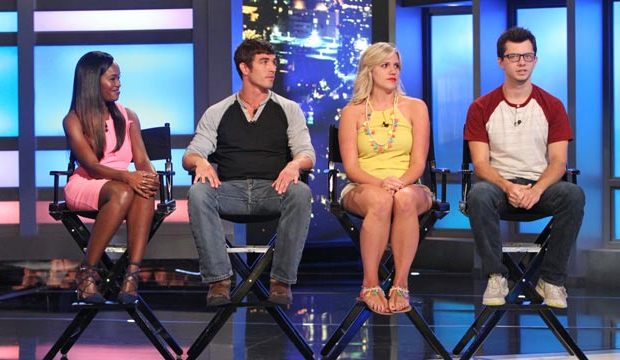 Four evicted houseguests competed in three epic battles for a second chance at the half million dollar prize on “Big Brother” Friday night. The Battle Back Showdown brought back Cameron Heard, Jillian Parker, Cody Nickson and Dominique Cooper to slug it out for a pass back into the house – and the remaining players inside had no idea. So which evicted houseguest came out on top? And did they actually get to return to the house? Find out in our Season 19, Episode 12 recap below.. Hurry — make your “Big Brother” 19 predictions for a chance to win a $100 Amazon gift certificate. It’s fun and easy, so start predicting right now.

Before the showdown kicked off, host Julie Chen explained that there would be no guarantee anyone competing would actually be allowed to return to the house. The four evicted houseguests would all compete in the first challenge, where the top two would advance and the other pair would be sent home for good. The two winners would then go head-to-head in the second competition of the night. The winner of that round would be the final evictee standing. But, in a “Big Brother” first, the battle back would end in a showdown between the top evicted player and a challenger from inside the house. The current houseguests would vote to send one of their own to face off against the final evictee in the most important challenge of the night. If the evictee won, they would return to the game. If they lost, no one would be returning.

Cameron, Cody, Dominique and Jillian each had their game faces on as they approached the first challenge of the night. “Maze Race” consisted of the competitors maneuvering a ball through a maze using a rope and pulley system. Throughout the maze, the ball could fall through various holes which would mean the player would have to start over. Jillian was the first to drop a ball, followed shortly thereafter by Cameron. Knowing he had a lead, Cody slowed down and remained calm to ensure he could finish in the top two. The strategy paid off and Cody was the first to finish the maze and advance to the next round. Cameron was able to rebound and finish in second place, sending Dominique and Jillian home for good.

Cameron was thrilled to advance, but Cody was in complete game mode knowing he needed two more wins to get back in the house. They then faced off in the next battle, “Billboard Bashers.” Both were given a balloon launcher to catapult balls at a billboard. The first player to knock out all 10 of the panels on the billboard advanced to the final challenge. Cameron was the first to strike, building an early lead. But Cody calmly changed his shooting strategy, and overtook the microbiologist in a nail-biting 10-7 victory, ending Cameron’s “Big Brother” dream all over again.

Julie then shocked the other houseguests by informing them about the secret “Battle Back Showdown.” Mark Jansen appeared to be the most concerned about this revelation, considering he turned his back on both Cody and Dominique before they left the house. Cody’s in-house girlfriend, Jessica Graf, ensured Mark that if it was in fact Cody who returned, he would be fine. After learning someone from inside the house would take part in the final challenge to block the evictee’s return, the houseguests each voted for the player they wanted to compete. True to form, the houseful of spineless followers all voted for their master, Paul Abrahamian, to go toe-to-toe with Cody.

Because the house got to choose their own challenger, Cody was allowed to choose which competition they would face off in. Cody chose the “Maze Race,” which was slightly different than the one he completed earlier. Despite the change, Cody’s experience paid off and he won this “battle of the alpha males” and an enthusiastic Jessica immediately leapt into his arms. Cody triumphantly returned to the house, but Julie warned the houseguests not to get too comfortable, the Head of Household (HOH) competition would soon follow. Tune into CBS on Sunday night to find out who the new HOH is and which two houseguests are nominated for eviction.