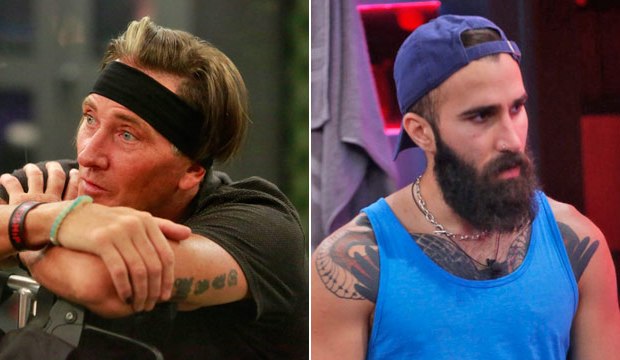 A new Head of Household was crowned and two players were nominated for eviction on Sunday’s episode of “Big Brother.” With only five houseguests remaining after Thursday’s double eviction of Jason Dent and Raven Walton, it is more important than ever that players take control of their own destiny. Who secured themselves a spot in the final four by winning the Head of Household competition? And who did they nominate for eviction?

Below, check out our minute-by-minute “Big Brother” recap of Season 19, Episode 34 and then sound off in the comments section about the night’s most shocking moments. Keep refreshing/reloading this page as we’ll be updating live.

8:00 p.m. – “Previously, on ‘Big Brother’!” After a week of planning, Christmas Abbott executed her (or Paul Abrahamian’s) plan to evict Jason. Jason’s closest ally, Alex Ow, was caught completely off guard and channeled her emotions into a much needed HOH victory during the second part of the double eviction episode. But instead of realizing that Paul had betrayed her, or even seeking revenge on the person who evicted Jason, Christmas, she made a strange move. Alex nominated Kevin Schlehuber and Raven, literally the only two people who had nothing to do with Jason’s eviction. It ultimately led to Raven walking out the door, which wasn’t even Alex’s goal. Now that it’s crunch time, will Josh Martinez be able to convince anyone else that Paul is playing them all for fools? Or will everyone continue to bury their heads in the sand as Paul plays puppet master?

8:10 p.m. – Unseen footage from prior to and during Thursday’s double eviction episode are being shared. Alex is crushed because Jason walked out of the house without hugging her. She thinks he might believe she had something to do with his eviction. She doesn’t seem to think Paul had anything to do with it because of a plot Paul came up with to let Josh and Christmas take the fall. Paul then instructed Alex to put Kevin and Raven on the block even though it would not benefit her. She basically admitted to doing it simply because Paul told her to.

8:17 p.m. – After winning the power of veto, Josh told Alex he would do whatever she wanted in order to get back in her good graces. She told him she wanted Kevin out, but Paul wanted Raven out and what Paul says goes. Josh disobeyed Paul’s order in this instance and voted to evict Kevin despite Paul and Christmas voting out Raven. Alex was blindsided twice in a row and is worried she might be next. You think? I give Paul about 20 minutes to convince her he’s taking her to the end. Meanwhile, Josh is a total train wreck and can’t stop crying. Alex is consoling him and will take any alliance she can get at this point. Paul then came into the room fake crying, but as soon as Alex left he smiled and began to celebrate. Josh was shocked and disturbed and said he felt like he had just seen the devil.

8:25 p.m. – Alex feels like she is in the twilight zone because she thought she had control of the game, but clearly has no power. Paul is convincing Kevin to throw the HOH competition. Like everyone else, Kevin trusts Paul completely and agrees. An excited Paul runs to tell Josh that they will throw the HOH to Josh now so he can take out Alex. Josh rejects Paul’s plan because he doesn’t want to take the shot at Alex and get more blood on his hands while Paul remains clean. Paul basically tells him to suck it up. Josh tells Christmas more about his suspicions of Paul and she immediately shuts him down. Christmas hates that Josh doesn’t believe everything Paul says and does. Her and Paul then decide they need to spend the entire week keeping Josh in line.

8:45 p.m. – Time for the HOH competition! It was the annual “BB Comics” competition. They aired a trailer for “BB Revengers,” a comic book film starring some popular houseguests from seasons past. To say these reality stars are bad actors would not do their lack of talent justice. But of course the houseguests thought it was great. For the competition, the players had to answer questions about the trailer they had just seen. The player with the most correct answers will win. It has already been decided that they are going to throw the competition to Josh. It’s getting pretty boring to watch all of these competitions where nobody actually competes and the winners are predetermined. Josh says in the diary room that he may just go his own way with this HOH and not follow Paul’s plan. We already know that will never happen. As planned, Josh wins HOH!

8:47 p.m. – Alex is worried about Josh winning but pretends she doesn’t care. Kevin is furious because Paul told him they were throwing the competition to Christmas.

8:59 p.m. – Production did their best to edit this episode to look like anyone but Paul had an independent thought. Josh knows the only way he can win is if he takes a shot at Paul. But, in a surprise to absolutely no one, Josh nominated Alex and Kevin for eviction.

Tune into CBS on Wednesday for the veto competition and an early eviction. If Alex or Kevin don’t win, expect Alex to be walking out the door.