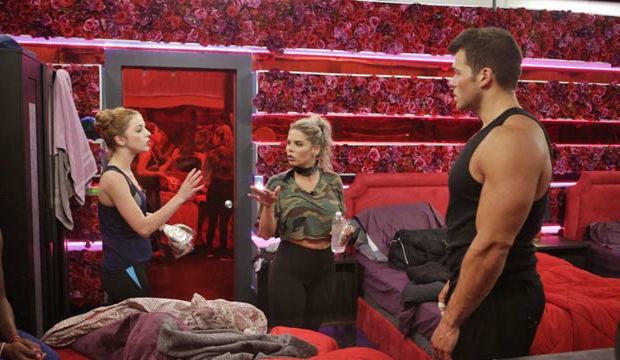 A new Head of Household rose to power after an intergalactic competition, a veteran continued his psychological warfare on the house, and two more competitors were nominated for eviction on “Big Brother” Sunday night. Did the new HOH shake up the house? And which houseguest suddenly became public enemy number one? Find out in our Season 19, Episode 9 recap below. Hurry — make your “Big Brother” 19 predictions for a chance to win a $100 Amazon gift certificate. It’s fun and easy, so start predicting right now.

With Cody Nickson out of the house, his girlfriend Jessica Graf was under pressure to win HOH in order to ensure her safety. It wouldn’t be easy though, as the houseguests were all perched onto a small platform against an inclining wall while water intermittently sprayed them in the face. As time wore on, the competitors began to drop like flies, starting with the larger-framed Josh Martinez and Mark Jansen. Next to fall, in order, were: Raven Walton, Ramses Soto, Kevin Schlehuber, Matt Clines, Jessica, and Dominique Cooper. With Alex Ow, Jason Dent, and Elena Davies remaining, the trio decided to discuss a deal for safety in exchange for ending their shared torture. Following a commitment to keep each other off the block, Jason and Elena dropped, making Alex the new HOH.

While the HOH competition was unfolding, it was revealed that days earlier, Paul Abrahamian instructed Kevin to vote for Ramses during Cody’s live eviction, just to cause chaos in the house. Kevin took Paul’s orders and the plan to cause confusion worked. It was also revealed that Paul had been grooming Alex the past week to earn her trust. Meanwhile, Jessica became concerned Alex would put her on the block again, even though her only ally went home last week. If Alex was the competitor she claimed to be, would it really make sense to send someone like Jessica home at this point? Or would Alex be ready to make a big move?

Alex told her top ally, Jason, that she did indeed plan to put Jessica on the block. Jason pleaded with her not to, explaining that she could become a much needed number for them. Understanding Jason’s point, Alex pointed out that Jessica had to go on the block. Whether or not they backdoor someone later, she needed to put up Jessica to keep the house under control. Instead of making a bold move immediately, Alex instructed Jason that they must move into their enemies’ collective, and then annihilate them.

Paul decided to meet alone with Alex to convince her to aim for his target instead of her own. Knowing she wouldn’t be foolish enough to get rid of her closest allies, his goal was to steer her in the direction of Dominique and Mark. Before his eviction, Cody had told Paul that Dominique and Mark were aware of his plan to go after Paul, and now Paul wanted them gone. Paul then stirred the pot even more by telling Dominique and Mark exactly what Cody had said about them.

Elena worked in a discussion with Alex hoping to ensure that the deal they made during the HOH competition was still valid. She instructed Alex that she did not want Mark or Dominique to be nominated, but once again Paul intervened and convinced Alex to target Dominique. His thoughts were that Dominique is the better competitor and also uses her fake talk show to extract more information from people for her own personal game.

In a more lighthearted moment of the evening, the adorable bond forming between Kevin and Ramses was shown. Kevin has become a father-figure to the 21-year old and began teaching him important lessons such as manners, how to make his bed, history and how to cheat at pool. The brief series of clips highlighting this relationship and were a fun distraction from watching Paul turn the rest of the house into his personal toy chest of puppets. Also, Jessica and Jason were finally allowed to return to the “Den of Temptation” to remove their ridiculous toad outfits. Finally, Jessica didn’t look miserable for a few minutes. In more heartbreaking news, Christmas Abbott returned to the house and informed everyone that she had ten bones broken in her foot and is unlikely to ever regain full mobility.

Finally, it was time for Alex to reveal her nominations for eviction. Not surprisingly, she nominated Dominique and Jessica, per her discussion with Paul. It is somewhat understandable that she wants cooler heads to prevail in the “Big Brothr” house, but it’s also disappointing to think Alex could be under Paul’s spell just like everyone else in the house. Will the Power of Veto (POV) shake things up this week? Or is Dominique doomed to be the next houseguest out the door? Find out who wins the POV on Wednesday night’s episode on CBS.