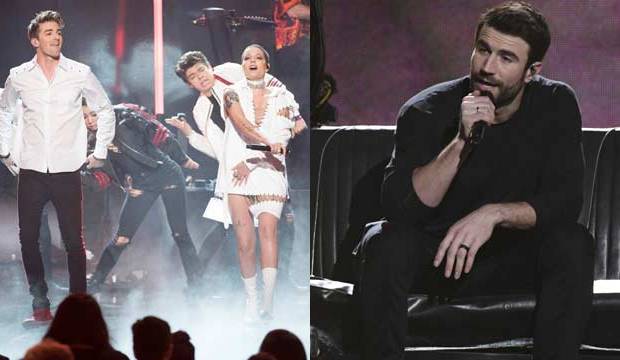 Billboard has announced a trio of new performers who will take the stage at the 2017 Billboard Music Awards, which will be held live on Sunday, May 21. The Chainsmokers, Halsey and Sam Hunt join the lineup for the event that honors the biggest achievements on the Billboard charts.

The Chainsmokers are tied with Drake as the most nominated artist of the year with 22 bids, and their Billboard chart accomplishments are impressive. Their single “Closer,” featuring Halsey, spent 12 weeks at number-one on the Hot 100 singles chart. That song went on to clock 32 weeks in the top 10, tying the record set by LeAnn Rimes‘s “How Do I Live.” “Closer” eventually fell out of the top 10, but their followups “Paris” and “Something Just Like This” extended their streak. Now the duo has spent 53 consecutive weeks in the top 10, second only to Katy Perry (69 weeks). Their nominations at the Billboard Awards include Top Artist and Top Song for both “Closer” and “Don’t Let Me Down” (with Daya).

Halsey will be promoting her new album, “Hopeless Fountain Kingdom,” which drops on June 2. She’s nominated seven times, all for “Closer.” And country singer Sam Hunt recently made an impact on the Billboard charts when his single “Body Like a Back Road” cracked the Hot 100 singles chart, which made it the highest-charting country song since “Cruise” by Florida Georgia Line in 2013. “Back Road” has also spent 13 weeks at number-one on Billboard’s Hot Country Songs chart; it’s been on top since February.

Other artists scheduled to perform at the awards are  Camila Cabello, Drake, Florida Georgia Line, Imagine Dragons, John Legend, Lorde, Bruno Mars, Nicki Minaj, Miley Cyrus and Ed Sheeran. Celine Dion will take part in a 20th anniversary celebration for her number-one hit “My Heart Will Go On,” and Cher will receive the ICON Award.

Who else will win at the Billboard Music Awards? Make your predictions here, and join the discussion with your fellow music fans in our forums.

Best BTS songs, ranked: Counting down their 21 greatest hits from 'No More Dream' to 'My Universe'…

Which albums have won the most Grammys? The biggest of all-time from Santana to Billie Eilish

Korean Invasion: BTS bow at number-one with 'My Universe' puts them in company with The Beatles, Drake…

'The Voice' schedule for Season 21: When will Ed Sheeran appear as Mega Mentor in Knockouts?

Drake albums, ranked: Fans voted, and it's a tie for number-one! But it's not 'Certified Lover Boy'…