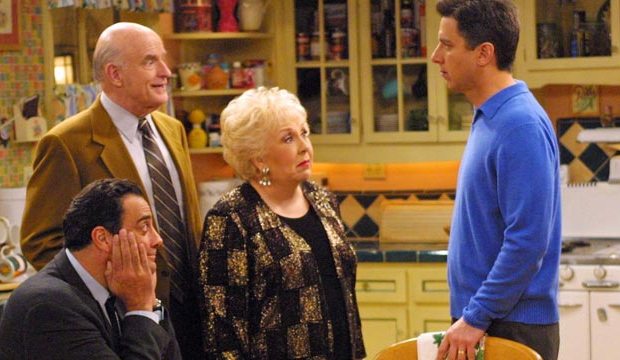 “We learned a lot from Peter and Doris,” reflects Brad Garrett about the deaths of his “Everybody Loves Raymond” parents, Peter Boyle and Doris Roberts. CNN’s Pamela Brown interviewed Garrett on Friday about the network’s upcoming docu-series “The Nineties,” and Garrett was soon rehashing memories about his TV dad and mom, who played the over-protective Frank Barone and Marie Barone to Garrett’s police officer son Robert Barone on the CBS hit sitcom.

“I remember when I got the pilot and I met Ray for the first time,” Garrett said about producer/star Ray Romano. “We were both stand-ups for years, but we had never met on the road and really didn’t know each other. When we knew that Doris Roberts and Peter Boyle were gonna play our parents, it was very, very exciting. I mean, these were two big stars. Doris came from theater and television, and Peter was a movie star in his own right.”

Garrett mimicked Romano’s nasally voice when he joked, “Hey, you know, this is gonna work out great because Peter is ‘Young Frankenstein’ and you could easily be his son.” When he and Romano finally got to meet their television parents, Garrett admitted, “It was incredible.” Boyle passed away in 2006 from heart disease, and Roberts died in 2016 from a stroke.

“Everybody Loves Raymond” was a favorite of the Emmy Awards, winning Best Comedy Series twice (2003 and 2005) and taking home many trophies for its talented cast. Roberts won four times (2001-2003, 2005) as Best Comedy Supporting Actress, while Garrett scored a trio of victories (2002-2003, 2005) for Best Comedy Supporting Actor. Despite seven straight noms between 1999 and 2005, Boyle never won for this role though he did accept an Emmy in 1996 for guest starring on “The X-Files.”