“I think the fans will be happy!” declares Caitriona Balfe about the upcoming highly anticipated third season of “Outlander,” the hit Starz fantasy romance drama that premieres this September. In our webcam chat from a few months ago (watch the exclusive video above), Balfe satiates fans with a few clues as to what to expect when “Outlander” finally returns, a whopping 14 months after the stunning Season 2 finale aired to critical and fan acclaim last July. “Every season there’s so much that’s new. In some ways it feels like a completely different show from one element to the next,” the actress reveals. “It keeps things really fresh for us. We’re constantly on our toes and excited about what’s coming around the corner.”

“Outlander” is based on the popular series of fantasy books by Diana Gabaldon, adapted for television by Emmy-nominated writer/producer Ronald D. Moore (“Battlestar Galactica”). The show centers on Claire Randall (Balfe), a nurse in 1945 married to Frank Randall (Tobias Menzies), who is mysteriously transported back in time to 1743 Scotland where she falls in love with rugged highlander Jamie Fraser (Sam Heughan). Season three (entitled “Voyager” like the third installment in Gabaldon’s book series), picks up right where we left off last year. Claire has traveled back to her 1948 life, pregnant with Jamie’s child. Back in the 18th century, Jamie is distraught over losing the love of his life and in the aftermath of the bloody Battle of Culloden. With the show’s lovers torn apart by continents and centuries, the questions surrounding their ultimate reunion are what seems to be keeping fans up at night. Thankfully, the “droughtlander” (the fans’ affectionate name for the interminable hiatuses between seasons) is almost over. And Balfe says that the reunion will not disappoint.

“The first couple of episodes they’re apart,” Balfe admits. “With Claire you’ll see her in Boston, some of it with Frank, some with Brianna (Sophie Skelton); I think it’s really nice you’ll get to see more of that relationship,” she says. “But then there’ll be a reunion!” the actress finally teases. “But I can’t say much about it!” she smiles coyly.

Pressed for more details on the new season, Balfe reveals that the sheer scope of this new season has been demanding for the cast and crew. “We’re doing some forties, some fifties, and some sixties. It’s been quite a challenge to tell this great journey not only of Claire and her life but also the relationship of Claire and Frank and what had become of that,” she admits. “When you’re dipping in and out of someone’s life and just showing vignettes it’s a challenge because you want to be able to give it real life you want to be able to show that this is a relationship with arcs and turns and it’s not all one this or one that.”

Although “Outlander” is not eligible for Emmys this season because it didn’t air within the eligibility period, go ahead and make your Emmy predictions. Weigh in now with your picks so that Hollywood insiders can see how their TV shows and performers are faring in our Emmy odds. You can keep changing your predictions until just before nominees are announced on July 13. And join in the fierce debate over the 2017 Emmys taking place right now with Hollywood insiders in our TV forums.

Related: Best episodes of ‘Outlander’ as chosen by fans 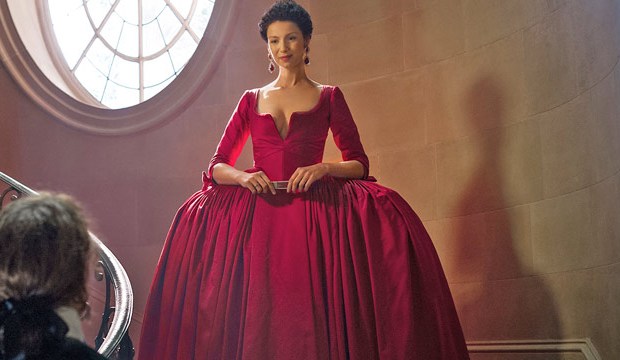