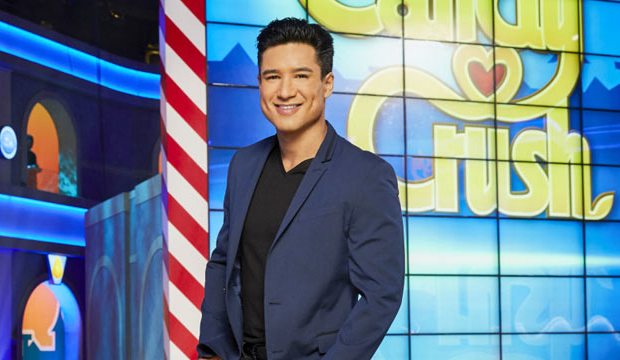 “Candy Crush” fans, after much hype and anticipation CBS’s new TV game show finally premiered, hosted by Mario Lopez. What did YOU think of the first episode, which pitted “Survivor’s” Joe Anglim, Kelley Wentworth, Woo Hwang and Jeremy Collins against “Big Brother’s” Frankie Grande, Caleb Reynolds, Da’Vonne Rogers and Paul Abrahamian? Was the series premiere delicious, bland or rotten? Let us know by voting down in our poll below.

Based on the jaw-droppingly successful mobile game, the “Candy Crush” TV adaptation pits teams of players against each other in fun and entertaining ways to see who can match the most candies. The winning team earns a sweet grand prize of $100,000. Read our recap of the series premiere, in which the “Survivor” duo of Joe and Kelley proved victorious.

After matching candies in qualifying rounds, teams get to choose whether they want to play on horizontal boards or vertical boards. Based on the first episode, the horizontal boards are much easier to maneuver, as the “Survivor’ teams that played these two games (Sugar Swing and Candy Cart) both made the finals. The “Big Brother” duos that played the two games on the vertical boards (The Balloon and Spin Cycle) had a bit of trouble making matches while swinging off of wires.

Lopez proved to be the host with the most, encouraging the players throughout the hour and constantly filling in the audience on who was ahead and who was behind. With an enthusiastic studio audience shouting and cheering throughout the episode, it was hard to look away for even a moment. What did YOU think of the series premiere of the “Candy Crush” TV show? Vote now in our poll.