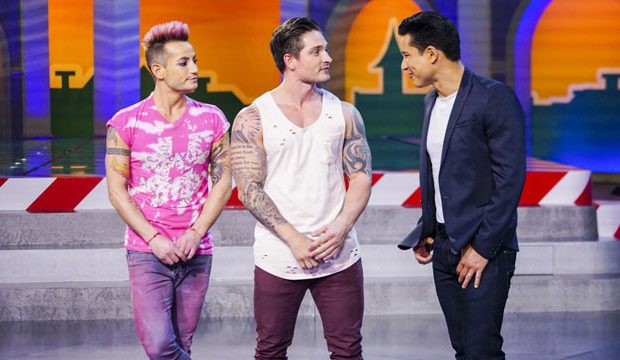 Woo and Jeremy won the first qualifying round and they chose to play Sugar Swing, a game where they went high above the horizontal board in a special swing. Woo steered the swing while Jeremy made the candy matches using a long candy cane pole. They were able to make an impressive 32 matches in two minutes, giving them the early first place position.

Da’Vonne and Paul won the second qualifying round and opted for The Balloon, a game where Paul floated up in a harness to make matches on the vertical board. Da’Vonne tugged on a rope down on the ground to send Paul up and down, though both players had trouble maneuvering the harness. The “Big Brother” duo only scored 16 matches during the time limit.

Kelley and Joe won the third qualifying round and picked Candy Cart, a game where they wheeled themselves around the horizontal board face-down on a special two-person cart. They simultaneously took turns maneuvering around the horizontal board, communicating verbally in order to match candies. They earned a whopping 45 matches, knocking out Da’Vonne and Paul in the process.

Last up, Frankie and Caleb played Spin Cycle, a game where both players swung from the same line that randomly moved them in opposite directions on the vertical wall. They both had trouble as they spun around in circles to reach matches high, low and anywhere in between. With only 26 matches, Frankie and Caleb weren’t able to make the finals.

The two “Survivor” teams — Woo and Jeremy, and Kelley and Joe — faced off head-in-head in the finals. In the first leg the players had to get a key to bottom of the board by matching candies below it until it fell, and in the second round players on harnesses had to keep matching until they got 50 candies. In the end the score was 50 for Kelley and Joe, and 46 for Woo and Jeremy, meaning that Kelley and Joe got to take home the delicious $100,000 grand prize.