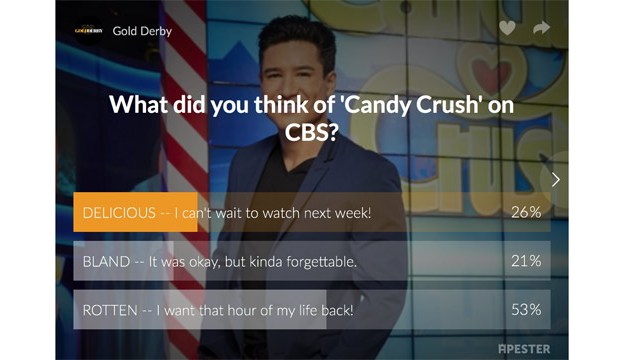 The reviews for CBS’s “Candy Crush” TV show are in and the reactions are decidedly mixed. We asked “Candy Crush” fans to rate the premiere episode hosted by Mario Lopez that featured “Survivor” players battling “Big Brother” houseguests, and here are the current results: 26% declare it to be “delicious,” 21% vote that it’s “bland,” and 53% say it’s simply “rotten.” Do you agree with those poll results? Let us know by sounding off down in the comments section.

To those 53% of haters, we want to hear YOUR ideas for how CBS might improve their highly anticipated TV adaptation of the popular “Candy Crush” mobile game. Do you think it should ditch the celebrity angle going forward and only let super-fans partake in the fun? Perhaps Lopez should have explained the rules a bit better? Would it have been more fun if viewers at home were able to play the exact same game boards as the contestants? Is the $100,000 cash prize not big enough to entice you? Let us know your own thoughts and suggestions below.

The “Survivor” duo of Joe Anglim and Kelley Wentworth ended up winning the $100,000 grand prize after taking the audience’s suggestion of playing Candy Cart, a game where they wheeled themselves around the horizontal board face-down on a special two-person cart. Woo Hwang and Jeremy Collins came in second place after failing to reach 50 candy matches in the head-to-head finals. “Big Brother’s” Frankie Grande and Caleb Reynolds placed third, while Da’Vonne Rogers and Paul Abrahamian came in last place.

Lopez is a TV vet who’s hosted “Extra” since 2008. On “Candy Crush” he encourages players throughout the hour and constantly fills in the viewing audience with who’s ahead and who needs to catch up. While the “Candy Crush” reviews are mixed, the ratings are respectable for a summer show as the first episode nabbed 4.1 million total viewers and a 1.1 demo rating.