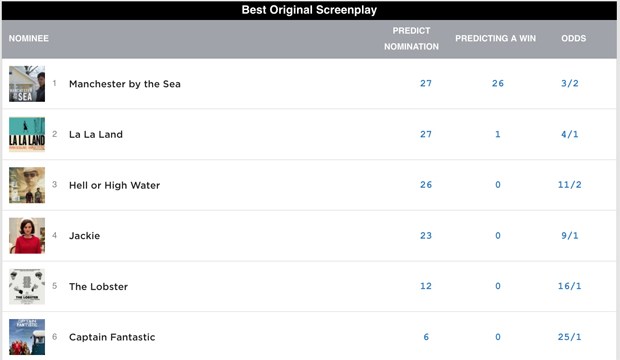 As “Captain Fantastic” continues to pop up in various guild awards like SAG and CSA, Oscar prognosticators are wondering if the Bleecker Street film can break through in the Best Original Screenplay race. According to Gold Derby’s Oscar experts from major media outlets, “Captain Fantastic” is in sixth place to earn a nomination with 25/1 odds, just behind “Manchester by the Sea” (3/2 odds), “La La Land” (4/1 odds), “Hell or High Water” (11/2 odds), “Jackie” (9/1 odds) and “The Lobster” (16/1 odds).

Written and directed by Matt Ross, “Captain Fantastic” stars Viggo Mortensen as a father raising his children in the Pacific Northwest wilderness, teaching them survival skills and philosophy instead of sending them to school and living in the city. While Mortensen is a frontrunner for a Best Actor Oscar bid, Ross’s original screenplay is a breath of fresh air and is poised to stage an upset when the full slate of nominees is announced on Jan 24.

Mortensen lost his Golden Globe race to the current Oscar frontrunner Casey Affleck (“Manchester by the Sea”) Sunday night. However, the SAG Awards are more firmly behind Mortensen having nominated both him for Best Actor and the cast for Best Ensemble. That ensemble bid is one of the season’s biggest surprises, but suggests that the actors, whose branch represents almost 20% of the Oscar-voting academy, has noticed and is responding kindly to the film.

Be sure to make your Oscar predictions so that Hollywood insiders can see how this film is faring in our Oscar odds. You can keep changing your predictions right up until just before nominations are announced on January 24 at 5:00 am PT/8:00 am ET. Be sure to read our contest rules. And join in the fierce debate over the Oscars taking place right now with Hollywood insiders in our forums.

In honor of our national day of eating, here are eight actors who gobbled their way to Oscar recognition

Pound for pound, heavyweights Viggo Mortensen or Christian Bale could knock Bradley Cooper out of the…

'Green Book' wins Audience Award at Middleburg Film Festival, and the Best Picture Oscar could be…