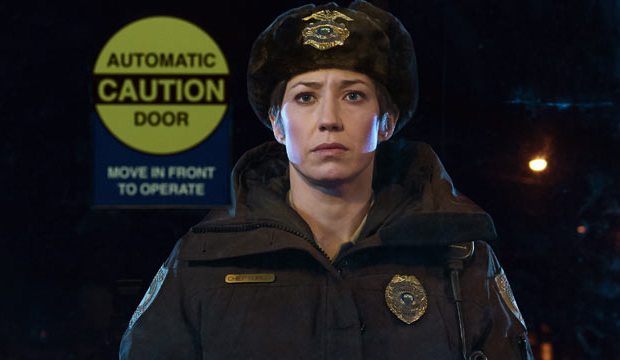 Carrie Coon had star turns in two critically acclaimed TV shows this season: she broke hearts as the  grief-stricken Nora Durst on the third and final season of HBO’s drama “The Leftovers” and tried to solve a crime on the third edition of FX’s “Fargo.” For her change-of-pace performance as detective Gloria Burgle on the latter she earned her first Emmy nomination. Coon contends in the ultra competitive Best TV Movie/Limited Series Actress race against four Oscar winners — “Big Little Lie” co-stars Nicole Kidman and Reese Witherspoon and “Feud” rivals Jessica Lange and Susan Sarandon — as well as past Emmy champ Felicity Huffman (“American Crime”).

While our Emmy odds have her in third place behind Kidman and Lange, this respected actress could pull off an upset at the Emmys for the following four reasons:

1. Gloria is Marge
Like Frances McDormand, who won an Oscar for playing a police officer in the original 1995 film version of “Fargo,” Coon also slowly peels away the icy exterior of her character and shows her vulnerabilities. In the final scene of the film, Marge is driving Gaear (Peter Stormare) to the police department and delivers a moving monologue about a beautiful day being ruined by his actions. Jump to Coon’s Gloria who, when facing off against the villainous V.M. Varga (David Thewlis) is also given the last words full of optimism and hope and having fried Twinkies with her son.

2. Vote splitting X 2
To take down a co-star in a popular vote one must be far and away the obvious choice. Lange vs. Sarandon could come down to the most buzzed about episode of the season “And the Winner Is (The Oscars of 1963”). While Sarandon as Bette Davis comes across as sympathetic as she loses the Oscar, Lange as Joan Crawford comes across unlikable as she campaigns against her and solicits other nominees to allow her to accept if they win. On “Big Little Lies,” Kidman has to do more of the heavy emotional lifting. But Witherspoon tosses aside her usual screen persona to play a cheating wife who interferes in everyone’s business.

3. Love for “The Leftovers”
Despite being a critical smash “The Leftovers” was snubbed by the Emmys save for a Best Drama Guest Actress for Ann Dowd this year. However, Coon made history at the TCA Awards when she won Best Individual Achievement in Drama for both “Fargo” and “The Leftovers.” Emmy voters might see awarding her for “Fargo” as a way of honoring her terrific year on television.

4. Being a have-not
While Coon earned a Tony Award nomination for her performance in a recent revival of “Who’s Afraid of Virginia Woolf?” her rival nominees have shelf loads of awards. Ironically, this could help her win as far more voters will relate to her career than the others.