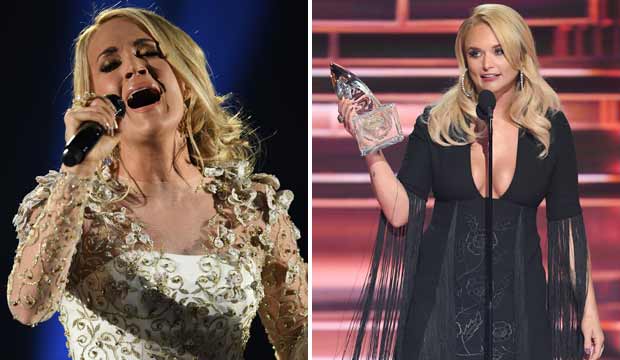 Carrie Underwood has won Female Vocalist of the Year at the Country Music Association Awards four times (2006-2008, 2016), but she has lost more often than not to Miranda Lambert, who has now claimed that prize a record seven times (2010-2015, 2017). But Underwood will get her revenge at the 2017 American Music Awards in just a couple of weeks on November 19. She’s the frontrunner to win Favorite Country Female Artist.

As of this writing Underwood gets leading odds of 4/5. She’s an extremely popular performer who is used to having the support of fans — she did win “American Idol” after all — and the AMAs are a fan-voted award. That could give her an edge here compared to at the CMAs, which are decided by country music industry professionals. Indeed, Underwood has already won this AMA race four times (2007, 2014-2016), which ties her with Faith Hill and Shania Twain as the fourth most honored in this category. A fifth win this year would break that tie, though she’d still have a way to go before catching all-time record-holder Reba McEntire, who has won it 10 times. Barbara Mandrell and Taylor Swift are currently tied for second place with six wins apiece.

Our racetrack odds are based on the combined predictions of hundreds of users who have made their picks at Gold Derby, and Underwood is the overwhelming favorite according to our most elite users. She’s backed by 20 of our Top 24 Users, who got the highest scores predicting last year’s AMA winners. And she’s also the frontrunner according to 21 of our All-Star Top 24, who got the highest scores when you combine the last two years’ AMA results. So the users who know the AMAs best think Underwood has a commanding lead. Do you agree?