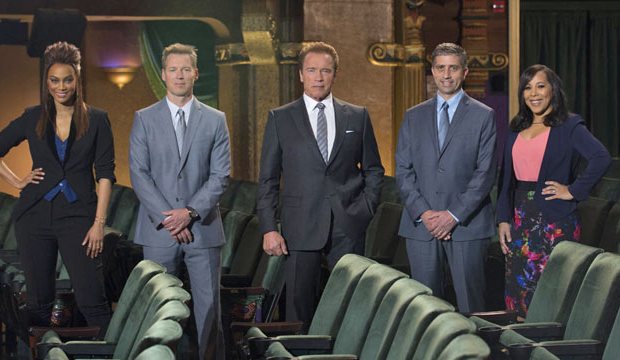 Arnold Schwarzenegger‘s introduction on NBC’s long-running “Celebrity Apprentice” franchise was a bit of a dramatic let-down. “See you soon!” Arnie smiled with a thumbs-up after splitting the 16 contestants into teams of men and women. “See you soon”?! Original host Donald Trump is no doubt rolling in his gold coin pile at hearing that bit of upbeat drivel. Too bad he’s busy being President-elect, because we want Trump back where he truly belongs, as “Celebrity Apprentice” host. So, did things get better during the two-hour season premiere? After reading our recap below, hurry and make your “Celebrity Apprentice” predictions for a chance to top our famous leaderboards. It’s fun and easy, so start now by predicting who will be terminated next.

The first unofficial task was the ritual naming of the teams. The men chose Team Arete while the women dismissed Nicole “Snooki” Polizzi‘s suggestion of Team Vagina and instead went with Team Prima. The teams them met with Arnold and his advisors: nephew Patrick Knapp Schwarzenegger and business woman Tyra Banks, who said that the first task would be to create a special “Tyra Beauty” experience and a 10-minute live presentation. The men decided on Boy George as their project manager and the women went with Porsha Williams.

Banks was so impressed with the men’s knowledge of her products and that they used their celebrity status during the presentation that she anointed them the winners of the task. Boy George won $50,000 for his charity, while the women were forced to battle for their lives in the boardroom. Porsha, who Arnie said talked too much, decided to bring back Snooki and Carrie Keagan. Ultimately, Arnie decided that Carrie did the least amount of work for the team and so he told her, “You’re terminated. Now get to the chopper.”

[POLL] ‘Celebrity Apprentice’ winners list: Who is your favorite champion of all time? Vote now!

In the second hour, Jon Lovitz and Carnie Wilson were named project managers of the Trident gum task that required a music video for their marketing campaign. George and Vince Neil wrote the song for Team Arete, while Wilson took on the songwriting duties for Team Prima. Lisa Leslie was in charge with recording the women’s commercial, and she ended up filming everything sideways, a nightmare scenario every iPhone user knows all too well. Lisa is also the only person on her team who didn’t agree with the boxing ring idea because it didn’t show enough smiles.

“Crush your enemies,” Arnie said at the beginning of the second boardroom, bringing up fond memories of old episodes with cutthroat Trump at the helm. The men ended up winning again, with Lovitz earning $50,000 for his charity. A tearful Wilson decided to bring back Lisa and Snooki to the boardroom, much to the confusion of Arnie, who thought she should have brought back Kyle Richards for creating the boxing concept that the judges hated. In the end, Wilson had to take the blame for that bad decision and so Arnie said, “You’re terminated. Hasta la vista, baby.”

Congratulations to our reader darioc who scored perfect 100% predicting “In Here You Call Me Governor.” This reader did the best at predicting the answers to this week’s contest questions, including that Carnie would be eliminated and that Team Arete (Men) would win the task. See where YOU place on our “Celebrity Apprentice” leaderboard.

Get a closer look at the Season 8 contestants by clicking through our cast photo gallery. In our “Celebrity Apprentice” predictions center, you get to answer the following questions before each episode airs on NBC every Monday at 5 p.m. PT / 8 p.m. ET.:

Who will win ‘Celebrity Apprentice’?

Which team will win 1st task?

Who’ll be terminated in 1st task?

Which team will win 2nd task?

Who’ll be terminated in 2nd task?

Gold Derby readers just like YOU often turn out to be our smartest prognosticators, so it’s important that you give us your predictions. You can continue to update and change your forecasts throughout the week, just click “Save” when you’ve settled on your choices. You’ll compete to win bragging rights and a place of honor on our leaderboard. Be sure to read our contest rules and sound off on the season of “Celebrity Apprentice” in our reality TV forum.