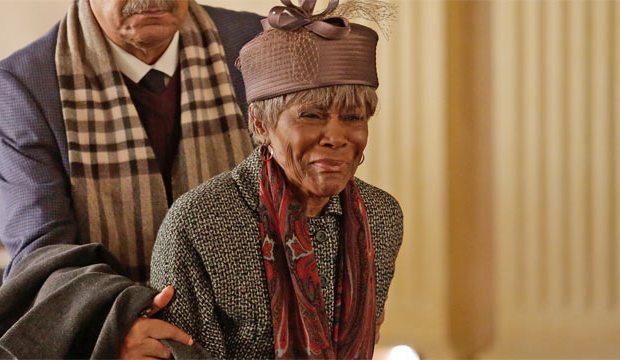 Three-time Emmy winner Cicely Tyson is in contention for a fourth victory this year thanks her popular guest role as Ophelia Harkness, the mother of “How to Get Away with Murder’s” principal character, Annalise Keating (Viola Davis). This marks the second Emmy nomination in this role for the 92-year old actress, who lost in 2015 to Margo Martindale (“The Americans”).

Tyson’s previous wins include Best Movie/Mini Actress for “The Autobiography of Miss Jane Pittman” in 1974 (she also took home a special Emmy for Actress of the Year) and another in 1994 for Best Movie/Mini Supporting Actress (“Oldest Living Confederate Widow Tells All”). Can Tyson now pull off her first victory in 23 years? Let’s take a closer look at her Emmy submission.

In Tyson’s episode submission “Go Cry Somewhere Else,” Annalise is embarrassed to see her parents at her trial, so she confronts them. That’s when Annalise learns that her mother Ophelia is suffering from dementia. Ophelia thinks that Annalise is taking the blame for her for setting the house on fire that killed Annalise’s abusive uncle decades ago.

Tyson is a living legend and it is impossible to overlook her name on any ballot without giving it some serious thought. If anyone is a sentimental favorite in this category, it’s her.

Tyson appears on-screen for less than seven minutes, but dominates every scene she is in. Her range of emotion goes from heartbreak, to anger, to confusion, and finally joy. We have seen in the past that screen time isn’t always important in this category as long as you have name recognition and a memorable performance. Her on-screen presence is so powerful in this episode that even her Oscar-winning co-star, Davis, all but disappears when Tyson speaks.

There aren’t many things more gut-wrenching than watching an elderly woman’s heart break. Tyson brilliantly portrays a woman riddled with guilt over the abuse her daughter suffered as a child. To make matters worse, her character believes her daughter is now taking the blame for a murder she, herself committed to protect her. Every moment of the performance is believable, from tears of pain to looks of total confusion on her face as her memory seems to lapse.

Emmy voters have not proven to be terribly sentimental toward Tyson in the past. She already lost in this category two years ago to Martindale, when many felt she had it in the bag. Part of that ambivalence might stem from the fact that Tyson already has three Emmys and is one of the most celebrated actresses alive. Voters don’t feel they owe her anything.

“How to Get Away with Murder” isn’t exactly an Emmy favorite. Sure, Viola Davis made history when she became the first African-American to take home Best Drama Actress for the ABC thriller, but that’s as far as the love for this series has gone. Tyson faces stiff competition from Alexis Bledel (“The Handmaid’s Tale”), Laverne Cox (“Orange is the New Black”), Ann Dowd (“The Leftovers”), Shannon Purser (“Stranger Things”) and Alison Wright (“The Americans”), who all give great performances.