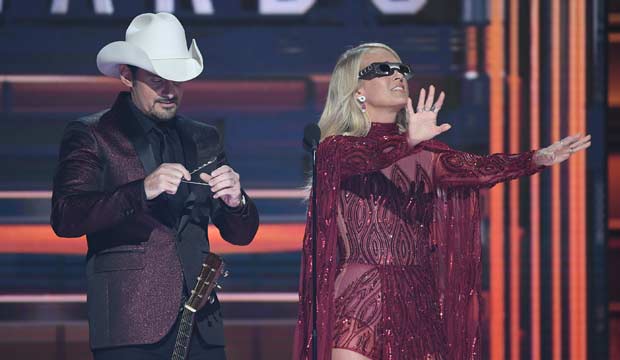 The 2017 Country Music Association Awards were handed out on Wednesday, November 8. This was the 51st year for the country industry kudos, and for the last 10 of those years the event has been hosted by singers Carrie Underwood and Brad Paisley. They not only emceed the event, they also co-wrote their own material and took the stage as musical performers. So how did they do in their milestone year hosting the show? Scroll down to vote in our poll, and check out the complete list of winners here.

After an opening number that brought together the entire country music community for a rendition of “Amazing Grace” and Hootie and the Blowfish‘s “Hold My Hand,” Paisley and Underwood started the night by joking about the political humor they wouldn’t be allowed to do, rattling off punny parody titles like “Stand by Your Manafort” before delivering a quick rendition of “Before He Tweets” to the tune of Underwood’s hit “Before He Cheats.” Overall their barbs were gentle rather than sharply pointed; the country industry and audience skew more conservative than, say, the folks watching and attending the Emmy Awards, so pleasing the crowd with political humor required walking a fine line.

There was also a playful bit in which they made fun of Tim McGraw‘s abs; McGraw and his wife Faith Hill played along gamely, but some of the highlights for Paisley and Underwood were musical. Underwood performed “Softly and Tenderly” for the “In Memoriam” segment and choked back tears when the screen displayed the images of the victims of the Las Vegas mass shooting on October 1, where 58 people were killed at a country music festival. Afterwards Paisley dueted with newcomer Kane Brown on Paisley’s song “Heaven South.”

Let us know below how well you thought they did overall. Do you think they should come back for another 10 years?