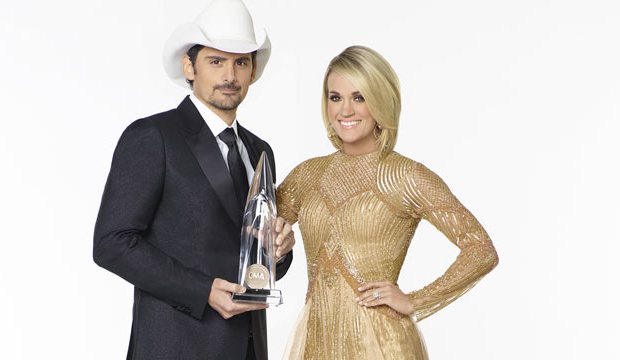 The CMA Awards will be able to cable and satellite subscribers on both ABC.com and through the ABC app. And the CMA Awards All Access Show, which is set to take viewers both backstage and onto the red carpet starts at 5:30 p.m. ET/2:30 p.m. PT on ABC/s Facebook page.

Lambert leads with five bids. While she picked up her 11th nomination for Female Vocalist (she won a record six years running beginning in 2010) and her fourth for Album of the Year (“The Weight of These Wings”), she was snubbed for the big prize: Entertainer of the Year.

Indeed, no woman contends in that top category this year. But that is not so surprising when you consider only one woman has won this award in the last 15 years: Taylor Swift (2009, 2011). And in that same time frame there has only been one year when more than one female act was nominated: 2010, when Lambert and the gender-mixed group Lady Antebellum were both in the running.

One of Keith Urban‘s four CMA nominations is for Entertainer of the Year. It’s his 10th time in the top race, with one previous win (2005). He also earned his 13th bid for Male Vocalist (he won three in a row beginning in 2004) and vies for both Single and Music Video of the Year for “Blue Ain’t Your Color.”

Rounding out the Entertainer of the Year category are defending champ Garth Brooks, who had won four times in his heyday (1991-1992, 1997-1998) and is nominated for the 12th time; Luke Bryan, who is on his fifth nomination and won in both 2014 and 2015 and a pair of second-time nominees: Eric Church and Chris Stapleton.

Be sure to make your CMA predictions so that country music insiders can see this year’s contenders are faring in our CMA odds. You can keep changing your predictions until just before winners are announced on November 8. And join the discussion on this and more taking place right now with Hollywood insiders in our music forums. Read more Gold Derby entertainment news