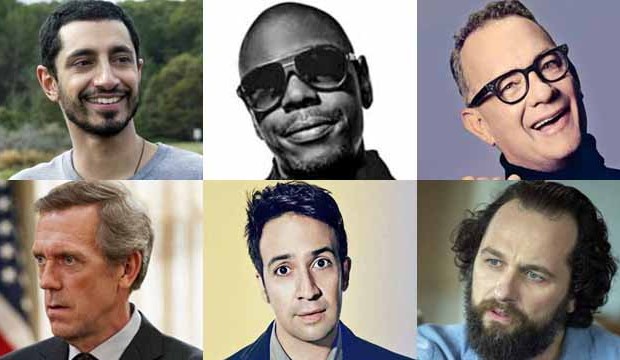 Five of this year’s six Emmy contenders for Best Comedy Guest Actor are either past winners or nominees. They include former champions Tom Hanks and Lin-Manuel Miranda plus previous nominees Dave Chappelle, Hugh Laurie, and Matthew Rhys. The other nominee is Riz Ahmed, who is a double contender this year for Best Movie/Mini Actor (“The Night Of”). We’ve got all six episode submissions for these 2017 contenders, so let’s take a look at what Emmy voters will be watching soon (descriptions below are from the nomination ballots).

RIZ AHMED as Paul-Louis on “Girls”
Ahmed is a two-time Emmy nominee this year.
Episode Title: “All I Ever Wanted”
After Hannah fakes an injury to get out of surf class, she runs into Paul-Louis at the bar and they hit it off. The morning after, Paul-Louis shows her how to experience Montauk like a pro. Hannah is won over by Paul-Louis’ positive outlook and attitude.

DAVE CHAPPELLE as Various Characters on “Saturday Night Live”
Chappelle is a four-time Emmy nominee with no previous wins.
Episode Title: “Host: Dave Chappelle”
Dave performs his stand-up routine. Parodies include a depressing post election party and a “Walking Dead” that includes favorite characters from Chappelle’s show. Dave and Kate, as two weirdos, hook up in a bar.

HUGH LAURIE as Tom James on “Veep”
Laurie is a 10-time Emmy nominee with no wins.
Episode Title: “Blurb”
Selina’s former running mate, Tom James, begs her to keep their sexual affair out of her forthcoming memoir – for the sake of his family. Tom quickly loses his moral highground when he exposes their tryst in his own recently published memoir – betraying Selina to boost book sales.

LIN-MANUEL MIRANDA as Various Characters on “Saturday Night Live”
Miranda is a one-time Emmy winner among his two nominations.
Episode Title: “Host: Lin-Manuel Miranda”
In his monologue, Lin-Manuel sings and dances about how happy he is to host SNL. Parodies include “Stranger Things;” Lin-Manuel as a 1900s Wells Fargo Banker; “Melania Moments” and a film about Lin-Manuel as an immigrant who calls his Mom.

MATTHEW RHYS as Chuck Palmer on “Girls”
Rhys is a three-time Emmy nominee including a double bid this year (including Best Drama Actor for “The Americans”).
Episode Title: “American Bitch”
Hannah and Chuck face off regarding sexual assault and “gray” areas. Hannah advocates it’s important to attend to women whose voices are pushed aside. Chuck maintains it’s hearsay and doesn’t understand why Hannah would write about such claims. Chuck wins Hannah over but, as she begins to relax, Chuck oversteps.