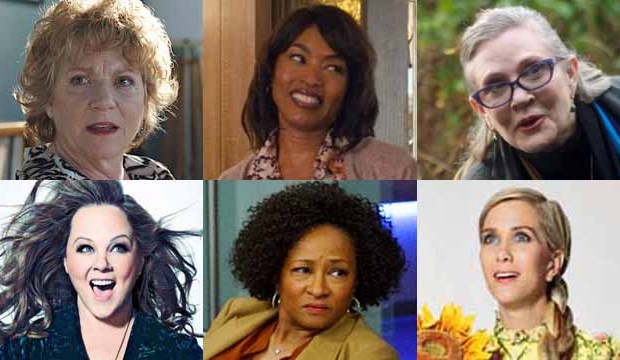 This year’s Emmy battle for Best Comedy Guest Actress features two past champions (Melissa McCarthy, Wanda Sykes), three previous nominees (Angela Bassett, the late Carrie Fisher, and Kristen Wiig), and a rookie candidate (Becky Ann Baker). We’ve got all six episode submissions for these 2017 contenders, so let’s take a look at what Emmy voters will be watching soon (descriptions below are from the nomination ballots).

BECKY ANN BAKER as Loreen Doring on “Girls”
Baker is a first-time Emmy nominee.
Episode Title: “Gummies”
In town visiting, Loreen tells Hannah she’s picked up an interest in medical marijuana gummies. When Hannah reveals she is pregnant Loreen shares how much she enjoyed her own pregnancy. Hannah becomes worried Loreen is eating too many gummies and the conversation turns when Loreen confesses how lonely she is.

ANGELA BASSETT as Catherine on “Master of None”
Bassett is a four-time Emmy nominee with no wins.
Episode Title: “Thanksgiving”
Catherine, Denise’s strong-willed and sharp-tongued mother, opens up her house for Thanksgiving over the years and learns to accept all of Denise’s guests.

CARRIE FISHER as Mia on “Catastrophe”
Fisher is a three-time Emmy nominee with no wins.
Episode Title: “Episode 6”
Rob’s snappy but loving mother, who has, to a fault, never once told him anything besides the blunt truth. After Sharon’s father passes away, Mia becomes an unexpected source of strength and friendship to Sharon’s mother.

MELISSA MCCARTHY as Various Characters on “Saturday Night Live”
McCarthy is a one-time Emmy winner among her eight nominations.
Episode Title: “Host: Melissa McCarthy”
Melissa chooses a Mom from the audience and takes her for a studio tour. Parodies include Trump’s interview with Lester Holt and a game show where Melissa gets hit in the face with pies. Melissa returns as Sean Spicer searching New York for Trump.

WANDA SYKES as Daphne Lido on “Black-ish”
Sykes is a one-time Emmy winner among her eight nominations.
Episode Title: “Lemons”
The nation is still reeling after the outcome of the presidential election; tensions are particularly high at Dre’s work. Much to his frustration, they haven’t been able to get anything done since election night – eight weeks ago. Junior is dealing with a disenfranchised student body as class president.