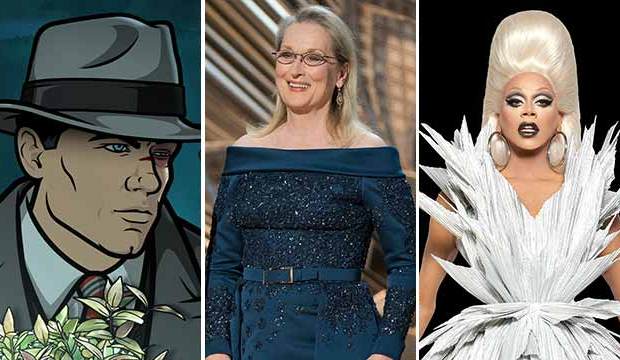 Will this weekend’s Creative Arts Emmy Awards reveal who the frontrunners might be in the top categories that will be announced at the primetime telecast the following Sunday, September 17? For the last two years “Game of Thrones” swept craft categories on its way to record-breaking victories for Best Drama Series. However, other shows like “Boardwalk Empire” have made a killing at Creative Arts only to have their hopes dashed at the home stretch. But whether these early prizes will bode well for “Stranger Things,” “Westworld,” “Veep,” “Big Little Lies,” and more, we’re going to see an eclectic array of winners in a variety of races.

We’re predicting 24 categories across a wide variety of fields, and if our racetrack odds hold true the highest profile winner we’re forecasting will be triple Oscar champ Meryl Streep. The legendary actress is best known for her work on the big screen, but her Emmy nomination this year for Best Narrator for “Five Came Back” is actually her fourth, and she has won twice before: Best Movie/Mini Actress for “Holocaust” (1978) and “Angels in America” (2004).

There are two voice-over categories at these awards, and the other is also expected to go to an Oscar winner: Kevin Kline for Best Character Voice-Over Performance in “Bob’s Burgers.” That FOX series is also up for Best Animated Program, but we think “Archer” is likely to win that title for the second year in a row, while Best Short Form Animated Program is tipped to go to Cartoon Network’s “Adventure Time,” also for the second time.

SIGN UPfor Gold Derby’s free newsletter with latest predictions
MAKE YOUR PREDICTION: Who'll win Emmy for Best Reality Host?
To save your prediction, you must log in to Gold Derby. Click here to sign in with existing account -- or create a new one.
Other top program awards will be decided this weekend, including in nonfiction contests where “13th” (Documentary Special), “Planet Earth II” (Documentary Series), “O.J.: Made in America” (Exceptional Merit in Documentary Filmmaking), and “Leah Remini: Scientology and the Aftermath” (Informational Program) are expected to prevail. Two top reality contests will also be presented, with “United Shades of America” out front for Best Unstructured Reality Program and “Shark Tank” leading the structured race for the fourth straight year.

The Creative Arts ceremonies will also include guest acting prizes for dramas and comedies. That could potentially bring long overdue first wins to Gerald McRaney (“This is Us”) and Hugh Laurie (“Veep”), as well as a posthumous prize for Carrie Fisher (“Catastrophe”), and kudos to “Gilmore Girls” alum Alexis Bledel (“The Handmaid’s Tale”). We’ll also get a preview of next Sunday’s Variety Series contest as Samantha Bee, Stephen Colbert, and James Corden vie for their respective variety specials — with Colbert expected to win. And RuPaul Charles will repeat as Best Reality Host for “RuPaul’s Drag Race” after his upset victory in 2016.

Do you agree with our Creative Arts predictions?