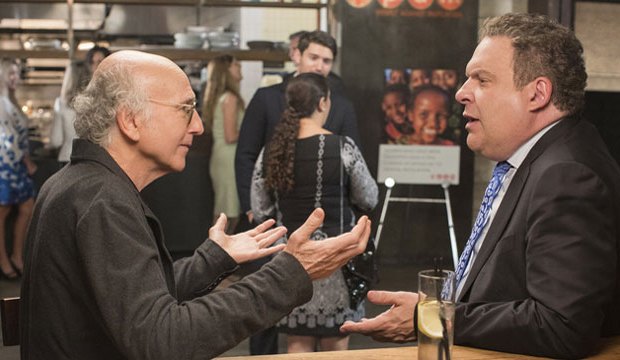 “Curb Your Enthusiasm” returned Sunday night on HBO after an elongated six-year hiatus, and based on the reactions from our feisty forum posters, the Season 9 premiere was pretty, pretty, pretty good. With the exception of our reader Sasha, who writes, “It’s not funny at all. I was so f***ing bored and couldn’t wait till it was over,” everyone else is raving about the new episode, titled “Foisted.”

In the season premiere, Larry David‘s cantankerous character gets involved in several awkward situations, including ruining a lesbian wedding, trying to get rid of a terrible assistant and being hit with a fatwa. What did YOU think about the “Curb Your Enthusiasm” 2017 premiere? Read some of of forum posters’ fun comments below and then join the discussion to sound off.

Jack Jansen: “Also, great episode. I can already tell I’m going to love this season. David is going to get some nominations.”

jf123: “**starts campaigning for J.B. Smoove to get a Supporting Actor nom**”

pulp50: “Really great start to the season! David and the whole cast are really on the top of their game as usual.”

lovelylovely: “For some reason I thought the writing/plot might be a little off, considering the hiatus, but it was great! Loved seeing Susan Essman and Larry going back and forth again. Same with Larry and Richard Lewis. Overall Grade: A”

Hunter-ish: “It’s my fav episode that I’ve seen. It was consistently funny and very good. Potential tape for David. Smoothe was great.”

Do you think “Curb Your Enthusiasm” will be a big player at the upcoming 2018 Golden Globes? Don’t forget, the show won the Globe for Best Comedy Series in 2003 and David was nominated thrice as Best Comedy Actor (2003, 2005, 2006) for playing a fictionalized version of himself. With increased buzz following the show’s elongated absence, we wouldn’t be surprised to see it recognized again.

Now, jump into the predictions center and let us know your choices today. You’ll be competing against thousands of others, including top TV experts who cover the television industry throughout the year plus our own Gold Derby editors. Hollywood insiders are desperate to see how their shows and performers are faring in our odds. You can keep changing your predictions until just before nominees are announced on December 11. And join in the fierce debate over the 2018 Golden Globes taking place right now with Hollywood insiders in our TV forums. Read more Gold Derby entertainment news.