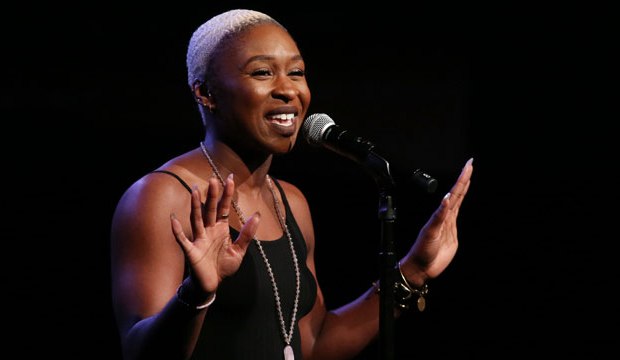 Cynthia Erivo could go from breakthrough star to EGOT winner in record time. She just won a  Daytime Emmy at the Creative Arts Awards held on April 28. That means in less than a year she has gotten herself three-quarters of the way there. Now all she needs is an Oscar — no sweat.

Erivo won the Emmy along with her co-stars in the Broadway hit musical “The Color Purple.” They made a guest appearance on NBC’s “Today,” and for that they won Best Musical Performance in a Daytime Program. That category was introduced last year to honor the musicians who make special appearances in daytime TV — especially talk and morning shows. Last year’s inaugural prize went to Rachel Platten for performing “Fight Song” on “Good Morning America.”

What’s unique for Erivo is that she won her three major industry prizes for the same creative work. It started last June when she won the Tony Award for Best Actress in a Musical for playing Celie, the abused heroine of “The Color Purple.” That role previously earned Whoopi Goldberg an Oscar nomination, and it also won a 2006 Tony for LaChanze, who played the role during the show’s original Broadway run.

Then this past February Erivo was awarded a Grammy for Best Musical Theater Album for the cast recording. That prize honored the producers of the recording as well as its principal soloists, so the award also went to her co-stars Danielle Brooks and Jennifer Hudson.

Now that Erivo has a Tony, Grammy and Emmy, could an Oscar be far behind? It’s true that winning an Oscar is easier said than done — a number of other EGOT hopefuls are just an Oscar shy of the grand slam, including Cynthia Nixon, Audra McDonald and Lin-Manuel Miranda, just to name a few. But watch out for Erivo in the near future. It was announced earlier this year that Erivo will star as Harriet Tubman, hero of the Underground Railroad, in a feature film, and that’s the kind of noble, biographical role that awards voters usually fawn over.

Depending on when that film is completed and released, Erivo could shatter the record as the quickest to win all four prizes. Currently the record is held by songwriter Robert Lopez, who checked all four trophies off his list in 10 years. Lopez also became the youngest EGOT winner by claiming his fourth award — an Oscar for the song “Let it Go” from “Frozen” — at the age of 39. But Erivo is just 30-years-old, so she has almost a decade to crush that record as well.

Kristen Anderson-Lopez all along? Her husband already has EGOT, but she's closing in on him