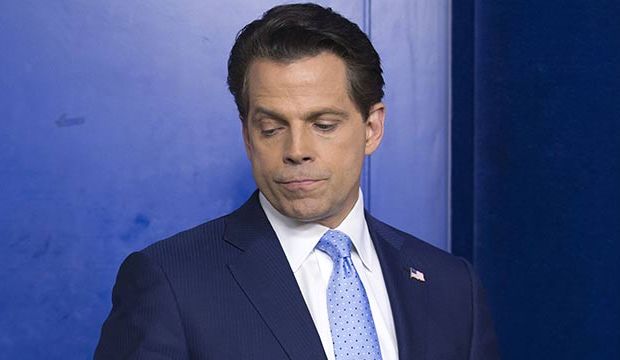 It seems like decades since Sean Spicer resigned from his position as White House press secretary over the hiring of Anthony Scaramucci as communications director, but it was only on July 21, and just 10 days later on July 31 the Mooch got his walking papers too in another shocking exit. After the Spicer resignation we asked our readers if he or any other Donald Trump associates should join the cast of “Dancing with the Stars,” just like politicians Tom DeLay and Rick Perry in seasons past. But our readers don’t want him or any other Trumpsters on “DWTS.” Check out our complete poll results below.

Scaramucci wasn’t even in our poll when we asked readers who should join ABC’s amateur dance show. He had just been hired, and we figured he would, you know, still have a job by the time “DWTS” announced its cast. Regardless, almost one-third of our respondents (32%) said of anyone in Trump’s orbit, “Keep them off my TV!” That’s understandable: whether you’re watching the news or late-night talk shows making fun of the news, you’ve seen enough of Spicey, the Mooch, and all the rest on your screens to last a lifetime.

But “DWTS” does love to cast controversial figures — not just politicians but also scandal-ridden celebs like Paula Deen and Ryan Lochte — and as noted above the show doesn’t mind tapping into politics to attract viewers. “DWTS” even cast Trump’s ex-wife Marla Maples in 2016 for season 22.

What do you think of the latest political upheaval? Are you hoping “DWTS” stays out of politics this season? Comment below, and discuss this and more with your fellow reality TV fans in our forums.