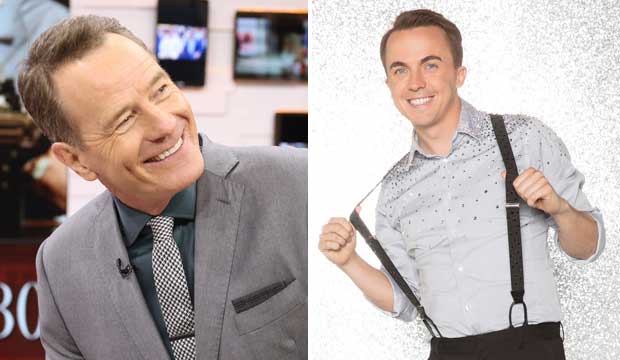 Season 25 of “Dancing with the Stars” ended as most of our users predicted, with Jordan Fisher named the winner of the Mirror Ball Trophy, Lindsey Stirling finishing second, and Frankie Muniz claiming third place. But even though Muniz didn’t win the championship, he has plenty of reasons to celebrate, and he received a hearty congratulations on Twitter from his TV dad, Bryan Cranston. Scroll down to check it out below.

Before Cranston was Walter White on “Breaking Bad,” of course, he played Hal in the FOX sitcom “Malcolm in the Middle,” where he earned three Emmy nominations for Best Comedy Supporting Actor (2002-2003, 2006) for playing Muniz’s dad. Muniz earned an Emmy bid of his own, becoming one of the youngest Best Comedy Actor nominees in history in 2001 at age 15. Now, to congratulate Muniz on a job well done after the “DWTS” finale, Cranston said, “Despite how old and studious I look, I was thrilled to see my son @frankiemuniz excel in an arena that he started as a raw beginner. He worked so incredibly hard. Beyond proud of him.”

Muniz was an underdog at the beginning of the season. Our users even thought he might be the first eliminated — sorry, Frankie! But he proved to be one of the biggest surprises on the dance floor, not just as a crowd-pleasing fan-favorite but as a genuinely talented performer who earned high marks from the judges. And his third-place finish isn’t even the end of the road for Muniz. It was announced during the finale episode that he and Mirror Ball champion Fisher would both be going on tour with the show.

What did you think of the final result on “Dancing with the Stars.” Should Muniz have been named the Mirror Ball champion, or did the judges and America get it right by picking Fisher? Vote in our poll below to let us know.

Despite how old and studious I look, I was thrilled to see my son @frankiemuniz excel in an arena that he started as a raw beginner. He worked so incredibly hard. Beyond proud of him. #DancingWiththeStars IMG_2009.mov