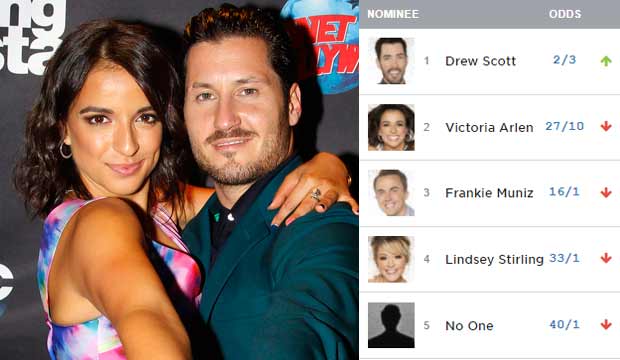 There are only five competitors left on “Dancing with the Stars,” and it’s hard to find a weak link among them. Every remaining contestant has demonstrated dance moves that have been popular with the judges, personalities that have been popular with viewers, or both. So the elimination in tonight’s semifinals is a tough call, but our users have narrowed it down to Drew Scott and Victoria Arlen.

As of this writing Scott gets leading odds of 2/3, which translates to a 60% chance of elimination. The HGTV star finished at the bottom of the judges’ leaderboard last week on “Trio Night,” with the judges giving him especially damning scores for his first dance, a waltz. But the last time Scott got the lowest score he rallied so much fan support that he remained in the competition while two higher-scoring competitors — Vanessa Lachey and Nikki Bella — were both sent home. So we shouldn’t count him out this week either.

Arlen has also benefited from strong fan support in the face of lower scores, and this week she was second to last on the leaderboard. But even though she scored better than Scott she probably shouldn’t get too comfortable. Our users give her 27/10 odds, or a 27% chance of elimination. But she has an inspirational story having come back from a near-fatal illness, and she’s paired with one of the show’s most popular pros, Val Chmerkovskiy. Did those factors contribute to enough viewer votes to keep her in the competition for next week’s finals?

Click on the graphs below for more detailed prediction stats for tonight’s episode. 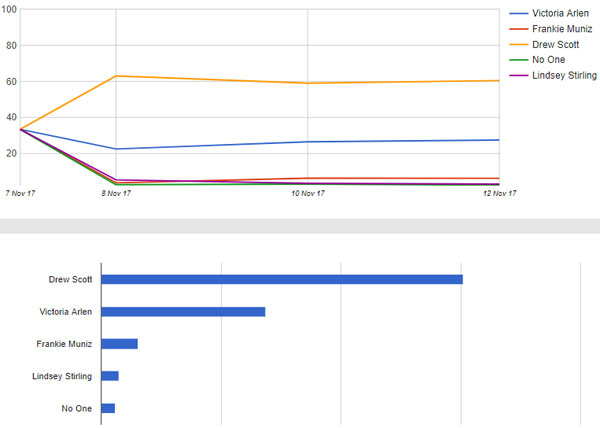