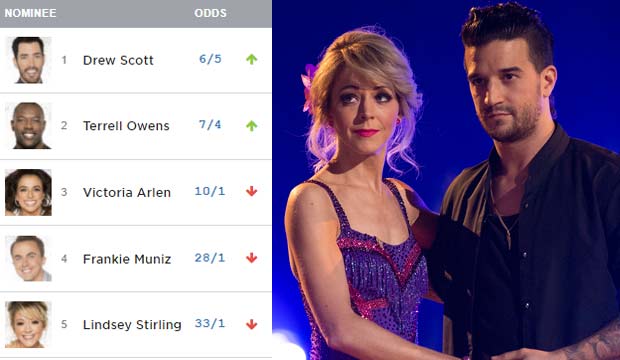 “Dancing with the Stars” contestant Drew Scott defied our racetrack odds by surviving “Halloween Night” last week. He had the lowest judges’ score the previous week, so we thought he was a goner. But even though there turned out to be two eliminations instead of just one, he safely advanced to the next round. Sent home instead were Nikki Bella and Vanessa Lachey, who had markedly higher scores than Scott, which means that Scott must have had ample support from viewers voting at home. So will those same viewers be there for him again?

Our readers aren’t so sure. As of this writing Scott gets leading odds of 6/5, which translates to a 46% chance of elimination. But the irony is that this time Scott is the one with a higher judges’ score; thanks to a perfect-scoring team routine, he ended up tied for second place with Victoria Arlen. So if he is eliminated it would be a lot like what happened to Bella and Lachey last week. It all comes down to his fans: will they rally behind him just as vigorously as they did when they saved him from elimination last week, or did they get complacent since he had a high score?

If Scott does survive, football player Terrell Owens is close behind with 7/4 odds, or a 36% chance of elimination. He finished at the bottom of the leaderboard on “Halloween Night,” so he’ll need Drew Scott-levels of  viewer support to stay in the game.

But what about Jordan Fisher and Lindsey Stirling? Thanks to their low-scoring team dance they finished in the bottom half of the leaderboard for the first time this season: Fisher in fourth place and Stirling in fifth. They have almost always scored high enough that they haven’t necessarily needed aggressive viewer votes to keep them in the competition, so this may be their biggest challenge yet. But our users aren’t too worried about them. Stirling gets 33/1 odds, or just a 3.1% chance of elimination, while Fisher has 100/1 odds, with no one predicting his elimination.

Do you agree with our odds? Click on the graphs below for more detailed prediction stats for tonight’s show. 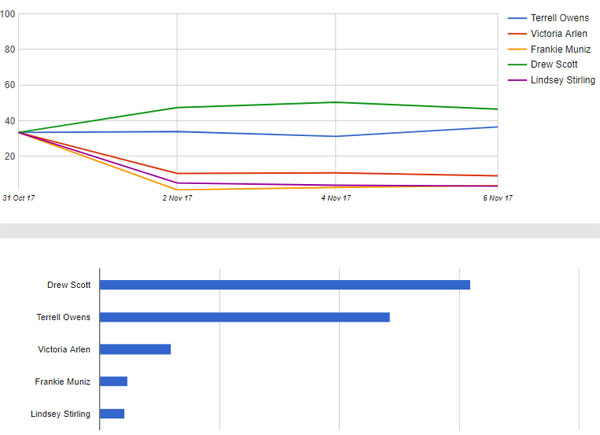