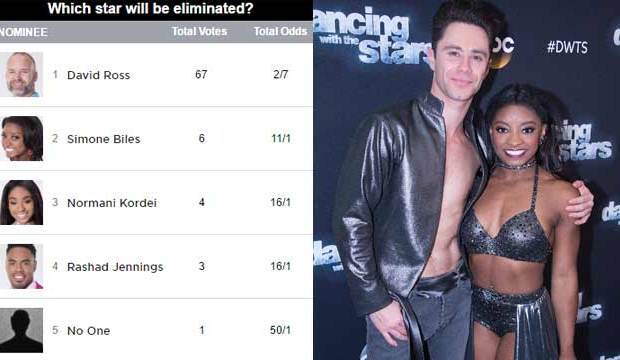 Simone Biles started season 24 of “Dancing with the Stars” as the frontrunner to win the Mirror Ball Trophy, and she stayed on top of our predictions for weeks. But could she now be at risk of a shocking elimination? “DWTS” is down to is final four contestants, but there’s a possibility that the Olympic gold medal-winning gymnast will fall short when the finalists are announced tonight.

But most of our users who have made their predictions at Gold Derby say that baseball player David Ross will be the one eliminated despite exceeding expectations all season long. He’s the first baseball player ever to compete on the show, and he’s the oldest contestant remaining at age 40. Thanks to his genial personality and charisma on the dance floor he has outlasted higher-scoring celebs like actress Heather Morris (eighth place) and figure skater Nancy Kerrigan (tied for sixth place). He has gotten enough support from fans to keep him in the competition this long, but now we think he has reached his limit. As of this writing he gets overwhelming 2/7 odds of elimination, which translates to a 77% chance of exiting the show just short of the finish line — or to be consistent with sports metaphors, he’s about to be tagged out at home plate.

But Biles still finds herself vulnerable. Though Ross finished last on the judges’ leaderboard last week, Biles finished second from the bottom after she was criticized for a lack of emotional connection to her dances. Biles scored seven points higher than Ross overall (72 to 65), but Ross has demonstrated in the past that he’s capable of overcoming lower scores with fan votes. So Biles ranks second in our elimination predictions with odds of 11/1 (9% chance of going home).

Singer Normani Kordei ranks third in our predictions with 16/1 odds (6% chance of going home) even though she got the top score last week. Since the judges’ scores account for half of the results, it seems mathematically unlikely that she would have so few viewer votes that she’d be eliminated, especially after delivering such a talked-about contemporary routine.

Football player Rashad Jennings also gets 16/1 odds (nearly 6% chance of going home). He finished second in the judges’ scores last week, so our users think he’s likely to advance to the finals.

Below, check out our latest predictions for who will be eliminated on “Dancing with the Stars.” Click on the chart for more detailed stats: