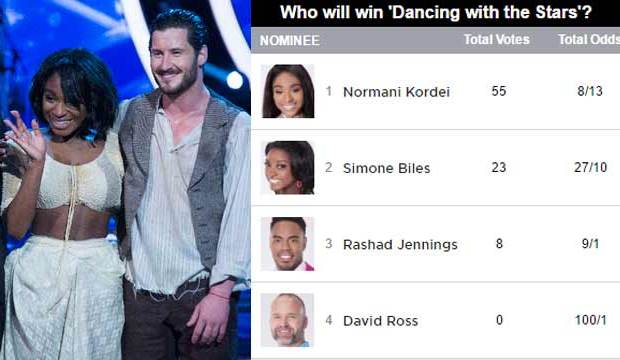 After seven weeks as the Mirror Ball Trophy frontrunner this season on “Dancing with the Stars,” Olympic gymnast Simone Biles dropped to second place in last week’s predictions. Singer Normani Kordei took over the top spot, and not only does Kordei maintain her lead going into the semifinals, she has actually widened it.

As of this writing Kordei gets leading odds of 8/13, which translates to a 62% chance of winning the season. That’s up from last week when she had a narrower lead with odds of 9/10 (54% chance of winning). More users who have made their predictions at Gold Derby were likely swayed this week by her dominant performance last Monday night, when she delivered two stellar dances, including a perfect scoring contemporary routine inspired by the experiences of slaves.

That was the fifth time Kordei has topped the leaderboard this season, which is far more than any of her remaining competitors have. Biles has only had the top score once, in the season premiere episode, and football player Rashad Jennings has gotten the top score twice. Baseball player David Ross has never come out on top.

But Biles is not going down without a fight. She remains a formidable contender with odds of 27/10 (27% chance of winning). That’s down from last week when she held second place with 9/5 odds (36% chance of winning), but she’s by no means out. She likely has a strong fan base voting for her week after week due to her strong likability and the good will she earned last summer when she made history at the Olympics with four gold medals, more than any other American woman has won at a single Olympic Games for gymnastics. The judges have criticized her for lacking a connection to the music, but her technique is generally faultless, so if she can finally match that technical mastery to a greater emotional vulnerability with her last few dances, she may yet overtake a surging Kordei.

Jennings is third in our predictions with odds of 9/1 (10% chance of winning). That’s actually a slight improvement from last week when he had 11/1 odds (8% chance of winning). His footwork hasn’t been as polished as Kordei or Biles, but he has consistently shown an emotional engagement and strong artistic interpretation that have earned him high judges’ marks and likely strong voter turnout from viewers at home.

Our users place Ross last with 100/1 odds. Just as last week, none of our users are predicting his victory, and he has just under 1% chance of taking home the Mirror Ball Trophy.

Below, check out our latest predictions for who will win season 24 of “Dancing with the Stars.” Click on the chart for our complete racetrack odds: