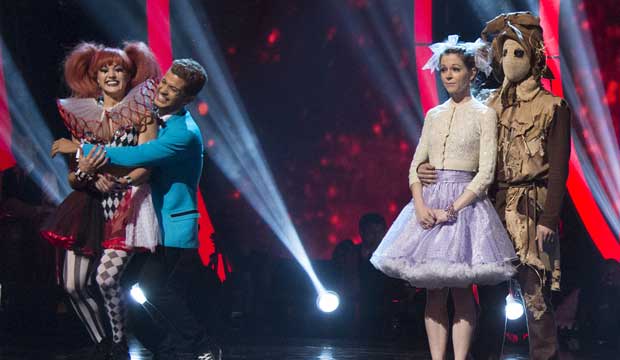 With last week’s shocking double elimination of both Nikki Bella and Vanessa Lachey on “Dancing with the Stars,” the competition continues to be closer than ever. With two weeks before finale week, the remaining six stars are giving it their all to secure their spot in the finals.

This week each couple will dance twice: first an individual dance in a previously unlearned dance style and second the ever popular trio dance. In the past the trio dance consisted of an additional pro or troupe member. However, this season the producers changed things up a bit by inviting a past “DWTS” contestant as the third member for each couple. The return stars include Kelly Monaco (season one champ), Kristi Yamaguchi (season six champ), Corbin Bleu (season 17 runner-up), Alfonso Ribeiro (season 19 champ), Laurie Hernandez (season 23 champ), and the reigning season 24 champion Rashad Jennings.

Will the celeb-infused trio dances push the remaining stars to greatness? Find out my thoughts and scoring predictions for the remaining couples below.

Victoria and Val’s beautiful Viennese waltz last week on “Halloween Night” put them back near the top of the leaderboard — tied for second place with Drew Scott. But this week Victoria has two of the toughest dances yet considering her limited sensation in her legs. The Argentine tango requires a lot of strong and fast leg movements, as well a sensual and passionate feel that we have yet to see Victoria take on. The jive also requires a lot of flicks and kicks that might be a challenge for Victoria. I’m especially curious to see how her trio jive with Laurie will work as Laurie is a much better dancer who knows how to sell a performance. I foresee her earning her highest marks for the Argentine tango but getting mixed reviews for her jive.

Last week Jordan earned his second perfect score of the season with an awe-inspiring paso doble. However, his subpar score for his team dance placed him in the middle of the pack for the first time this season. But I fully expect Jordan to deliver two amazing routines once again. The quickstep should be a breeze for him as he has the stamina and charm to deliver a knockout routine. Then his salsa with Corbin Bleu should go down as one of the best trio dances of all time. Like Jordan, Corbin has a great sense of how his body moves and a great sense of musicality.

Frankie’s haunting yet mesmerizing contemporary routine was a hit with the judges, earning him his first perfect score and the top spot on the leaderboard for the second time. The pressure is on for Frankie and Witney to deliver two more flawless performances. Out of the two dances I think Frankie will score higher with his Viennese waltz. As I’ve mentioned in the past, Frankie does extremely well with ballroom dance styles as he tends to have a great frame and hold. Also, he’s great at more lyrical dances, which should help him with this performance. His trio dance with Alfonso should be really interesting as Frankie is a hit or miss with more rhythmic dances. Like Victoria dancing with Laurie, I’m afraid that Frankie might not measure up to his trio partner Alfonso.

After an upward trend in scores over the last few weeks, Terrell and Cheryl found themselves at the bottom of the leaderboard after receiving mixed reviews and scores for both their individual and team dances last week. These dances might be the final ones of the season for him and Cheryl unless their fans were able to save them by aggressively voting. Up first for the pair is a Charleston routine. The Charleston, like jazz and contemporary, is a dance style that is usually guaranteed to give the celeb a boost in their scores. As long as it’s entertaining, Terrell and Cheryl should have no problem achieving that.

For his trio dance, Terrell is paired with the very first champion of “Dancing With the Stars,” Kelly Monaco, for a rumba that I’m sure will be oozing with sex appeal. But he and Cheryl must be careful to not just rely on that and make sure he delivers on the choreographic content so they get the high scores they’ll need if they happen to make it to next week.

Last week, not only did Drew survive the double elimination despite being at the bottom of the leaderboard, he also ended up scoring higher than this season’s frontrunners Jordan Fisher and Lindsey Stirling. Tonight I think Drew will do a solid job with his waltz routine; he’s proven that he can handle ballroom dances. But I’m really curious about how Drew will handle a Latin dance. This is Drew’s first uptempo Latin dance, though he got the cha cha which is easier than the salsa and samba. Another plus for Drew is that he’s paired with last season’s champ, Rashad Jennings, who has charisma for days and can sell the heck out of a cha cha.

SEE‘Dancing with the Stars’: Top 10 BEST Pro Dancers Ever

Lindsey Stirling proved last week that she wasn’t going to let a rib injury ruin her chance of winning the Mirror Ball Trophy. She battled through the pain and delivered one heck of a paso doble, then sucked it up to complete her team dance. But due to her lackluster team score, Lindsey and Mark found themselves second to last on the leaderboard. With the competition getting more physically demanding than ever will Lindsey be able to continue dancing through the pain, or will it get to a point where she can’t bear it anymore and has to drop out?

First up for Lindsey and Mark is a samba. Had it not been for her injury, I would expect them to knock this right out of the park. Instead I think we might see Mark simplify the choreography a bit as the samba is one of the more intricate and difficult dances to execute. For her trio dance, Lindsey is paired with one of Mark’s former partners, Kristi Yamaguchi, for a jazz routine. Along with Jordan and Corbin’s trio dance, this is the other performance I’m most excited to watch. Kristi is one of the highest scoring contestants to ever appear on the show, so with Mark’s creative mind this season along with Lindsey’s exceptional dancing we’re in for a treat with this trio.