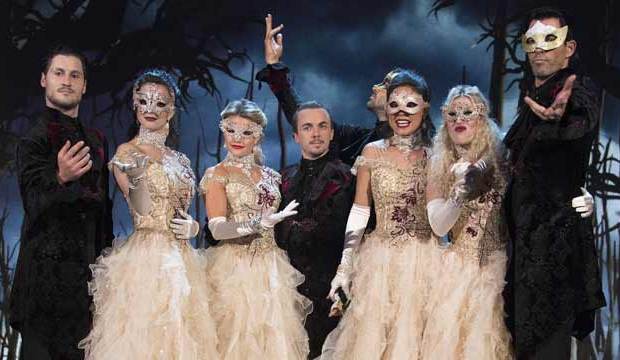 “Halloween Night” on “Dancing with the Stars” proved to be a treat for some of the contestants and a nightmare for others. Frankie Muniz and his partner Witney Carson scared off the competition to earn a perfect 60 out of 60 after you combined his individual and team dances. Victoria Arlen and Drew Scott also saw their scores improve with their two dances put together as well.

But this season’s top scorers, Jordan Fisher and Lindsey Stirling, took a bit of a tumble this week, landing right smack in the middle of the leaderboard thanks to their so-so team dance. And NFL star Terrell Owens, who was on the same team, couldn’t charm his way to the judges’ hearts this week as his combined scores landed him at the bottom of the leaderboard for the second time this season.

In the end, Nikki Bella and Vanessa Lachey received the biggest fright as they were both eliminated in a painful and shocking double elimination. Find out below who I thought spooked the competition and who needed some fine-tuning:

I thought this routine was frightening, intense, mesmerizing, and told a great story. Frankie did a great job of delivering the character of the dance. I loved how simple yet powerful Witney’s choreography was as well. Definitely one of Frankie’s best performances this season.

I feel like a broken record, but Jordan has to be one of the best, most consistent celebrities to ever appear on “DWTS.” I loved the “Red Riding Hood” theme. I thought it was really creative, fun, and entertaining. Jordan impressed me in showing his more aggressive side, and I also enjoyed the use of the troupe as well.

I thought for sure that Carrie or Len would dock them a point or two, but they couldn’t find any faults at all — and Len even admitted he was looking closely for errors.

After earning her first perfect score on “Movie Night,” Lindsey was feeling the effects of going all out. She suffered a rib injury during dress rehearsal for that earlier performance. But Lindsey is a trooper, and her Halloween paso doble was insanely fast and full of attack. Despite her injury, Lindsey delivered an electrifying routine.

If only she weren’t injured this would’ve been another perfect dance for her.

Victoria was feeling a bit down after being in jeopardy last week, and she also struggled with letting herself be vulnerable for her Halloween waltz. But as I predicted, her Viennese waltz with Val was lovely and full of lyrical and sweeping movements. Ballroom is right in Victoria’s wheelhouse, and this was a great routine to get them back to the top.

Those scores were well deserved.

Drew tried to push himself hard to move back up the leaderboard after finishing last on “Movie Night.” And you could tell that Drew really wanted it. The routine was fun, entertaining, and full of energy. I was glad to see Drew back in the game.

Man, my predictions were on a roll this week.

Last week was a bittersweet moment for Vanessa as she received her highest score, but her husband Nick Lachey was eliminated. So Maks really pushed for Vanessa to earn her first perfect score of the season on “Halloween Night.” I too was hoping that this would be their first perfect dance. However, it fell flat for me. I think Vanessa was too intense, which caused her to lose balance and not finish her movements completely. Not one of her better dances.

I was completely off with my prediction for this dance.

After having her doubts about Terrell earlier in the season, Cheryl is now realizing his potential to make it far. But while I thought the technique and frame were pretty good in their tango, I agreed with Carrie Ann that at times it lacked energy and attack.

I agreed with judges’ scores.

8. Nikki Bella & Artem Chigvintsev – Jive (“I Put a Spell on You” by Bette Midler)

I don’t think this dance really captured the campiness of the movie. Nikki was a bit too careful with her dance steps. As I expected, her flicks and kicks didn’t have the attack needed to really sell the dance.

I agreed with the judges’ scores.

I thought this routine was pretty creative. Personally, I felt that everyone was in sync and complemented each other, despite what the judges said.

I wasn’t expecting scores this low considering the caliber of who was on the team.

Wow, what an amazing performance from Team Phantom of the Ballroom. This was definitely one of my favorite team dances of all time. Great job!

With the surprising elimination of both Vanessa and Nikki, anyone could be at risk of going home. I’m fairly confident that Jordan and Lindsey are safe regardless of the dip in their scores. I also believe that both Drew and Frankie’s comeback performances will keep them safe another week as well. So that leaves us with Terrell and Victoria. Between the two, I think this will be the end of the road for Terrell. He’s been one of the biggest surprises this season, but I just don’t see him outlasting the remaining contestants.