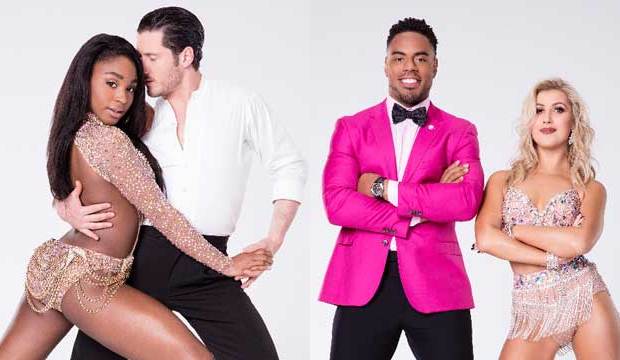 Week two of “Dancing with the Stars” might just shake up our predictions for the rest of the season. After leading our Mirror Ball Trophy predictions when the celebrity contestants were announced, Olympic gymnast Simone Biles got the highest judges’ score in the season premiere, but not in episode two. In fact, there was a tie at the top of the leaderboard this week and Biles wasn’t a part of it. She finished tied for fourth place this week for her cha cha with pro partner Sasha Farber, and our users didn’t see that coming.

In our predictions center, the users who entered our contest gave Biles 2/3 odds of getting the high score, which translated to a 60% chance of being the judges’ favorite for the second week in a row. But if it wasn’t going to be her, we thought it would be “Glee” actress Heather Morris, who had 7/2 odds (22% chance). Instead, the two contestants who won the night were singer Normani Kordei (14/1 odds, 7% chance), who also performed a cha cha, and football player Rashad Jennings (20/1 odds, 5% chance), who delivered a Viennese waltz. They both received straight 8s from the judges for a total of 32 out of 40. Combined, only eight users predicted that result, which made this far and away the hardest prediction to make this week.

It was easier to predict the lowest score and elimination: Chris Kattan in both cases. The “Saturday Night Live” comedian revealed more about his neck injury and subsequent surgeries this week, even showing an x-ray that displayed what looked like pins up and down a large portion of his spine. When he was sent home from the competition, he said that he wished the extent of his injuries had been known earlier. Would he have gotten more generous scores and more viewer support if we had known more of his story? I think that’s quite possible. The judges and voters have embraced dancers in the past for overcoming physical challenges, from hearing impairment (Nyle DiMarco) to amputation (Amy Purdy, Noah Galloway) to dwarfism (Terra Jole). If we had known more about what he had been struggling through, perhaps he would have made it to week three.

But Kattan did improve a full five points from last week, scoring 22 out of 40 (up from 17), so he did go out on a higher note. He actually tied with Mr. T for the bottom spot on the leaderboard, so now that Kattan is gone that leaves Mr. T in a perilous position going into next week’s show.

In our weekly predictions contest, an impressive five users scored 100% by correctly answering all four of our prediction questions: who would get the high score (Jennings or Kordei), who would get the low score (Kattan or Mr. T), who would be eliminated (Kattan), and how many 10s the judges would give out (Zero). Those users were RicosMama, taloson, brima531, Caesar52 and ____. Of those five, RicosMama is at the top of our leaderboard because she got the most favorable odds when she locked in those predictions and placed one of her 500-point big bets on Jennings to receive the high score when he was at 18/1 odds, resulting in a 9,000-point payout. That alone gave her more points than anyone else who had 100% predictions this week.

Check out the top 10 users in our predictions chart below. Click on the chart to see the complete predictions leaderboard so you can find out how well you did. You can already make your predictions for next week here. You get to answer the following questions before each episode airs on ABC every Monday at 5 p.m. PT / 8 p.m. ET.:

Who will win “Dancing with the Stars”?

Who will get the HIGHEST judges’ score?

Who will get the LOWEST judges’ score?

Before you make your predictions, make sure to consult the judges’ scores from tonight’s episode, which along with viewer votes will determine who if anyone is sent home next week: