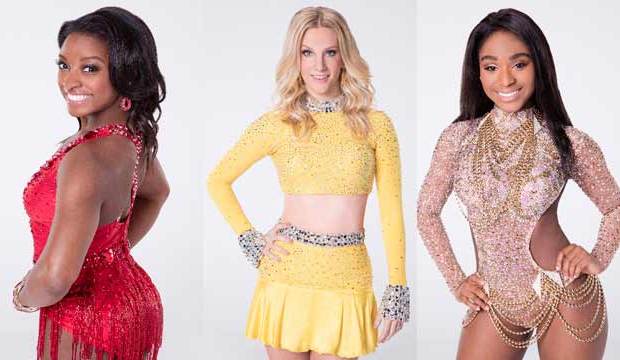 After considering the cast it looks like the women have a leg up on the men in terms of dance ability — at least on paper. Heather Morris (“Glee”) danced with Beyonce, Kordei is known for her sexy dance moves, Jayne is a Billboard-charting dance recording artist, and Biles and Kerrigan both come from sports that typically do well on this show (gymnastics and ice skating, respectively).

So in anticipation of the season premiere on March 20 here are my rankings of the female stars in order of their likeliness to take home the Mirror Ball Trophy.

At first I was a bit hesitant about ranking Biles first. However, I think she will benefit a lot this season against other celebrities like Nancy Kerrigan, Normani Kordei and Heather Morris who will have a higher expectation to deliver based on their dance experience. So if her pro partner Farber is smart he will definitely have Simone fit into the “Most Improved” narrative that worked in season eight for fellow Olympic gold medalist Shawn Johnson. Also, gymnasts tend to do extremely well in the competition. All four previous gymnasts (Shawn Johnson, Aly Raisman, Nastia Liukin and Laurie Hernandez) have placed fourth or higher in their respective seasons.

“Glee” star Heather Morris is definitely the “ringer” contestant of the season. Aside from appearing on “Glee” she’s danced backup for Beyonce and auditioned for “So You Think You Can Dance.” Oftentimes ringers make it all the way to the finals, and indeed I think Morris is primed for a spot in the top three. However, she will have the added pressure to do well each week as expectations will be high. Her partner Chmerkovskiy will also have to do his part in making sure that the choreography is top notch and memorable. If not, she could be a surprise elimination.

‘Dancing with the Stars’: First look at season 24 celebrities and pros

Fifth Harmony singer Normani Kordei is known as the dancer of the group. Aside from having probably the biggest fan base of all the stars, she’s paired with the most popular male professional this season. My only concern with Kordei is that she can come off as shy and closed off. If she’s able to come out of her shell along with memorable routines, she could definitely win the whole thing.

Ice skaters, like gymnasts, do extremely well on “Dancing With the Stars.” Skaters Kristi Yamaguchi, Apolo Anton Ohno, and Meryl Davis have all taken home the Mirror Ball Trophy. Kerrigan could join them as she’s still in great physical shape and is in the same age range as the “Dancing With the Stars” core audience. To really stand out this season you either have to have a preexisting fan base or memorable routines. Kerrigan will no doubt be a standout in the ballroom, though I’m skeptical about how she’ll handle the Latin dances.

‘Dancing with the Stars’ season 24: Which celeb will you be rooting for? [POLL]

Erika Jayne is the fourth “Real Housewife” to join “Dancing with the Stars” after fellow “Beverly Hills” cast mate Lisa Vanderpump, NeNe Leakes and Kim Zolciak-Biermann. Out of these women, Jayne is the most experienced with performing, which will help her in selling her dances. In other seasons she would be a contender. However, I think she will probably fall somewhere in the middle and get lost in the shuffle against the above athletes and performers with extensive training and experience. Hopefully, Savchenko will choreograph to Jayne’s strengths and create very sexy and fun routines to help her stand out.

Charo is this season’s Cloris Leachman. She’s a lively personality that will no doubt bring unpredictability to the competition. It will be interesting to see if Motsepe will be able to rein her in to help teach her. I don’t think that he is well equipped yet to handle someone as colorful as Charo, so I predict that there will be a disconnect between the two, ultimately causing Charo to be eliminated early.

Gold Derby readers just like YOU often turn out to be our smartest prognosticators, so it’s important that you give us your predictions. You can continue to update and change your forecasts throughout the week, just click “Save” when you’ve settled on your choices. You’ll compete to win a $100 Amazon gift certificate, bragging rights and a place of honor on our leaderboard. Our racetrack odds change as you make your predictions, just as they do when you bet on the Emmys, Oscars, Golden Globes and more. Be sure to read our contest rules and sound off on the season of “Dancing with the Stars” in our reality TV forum.