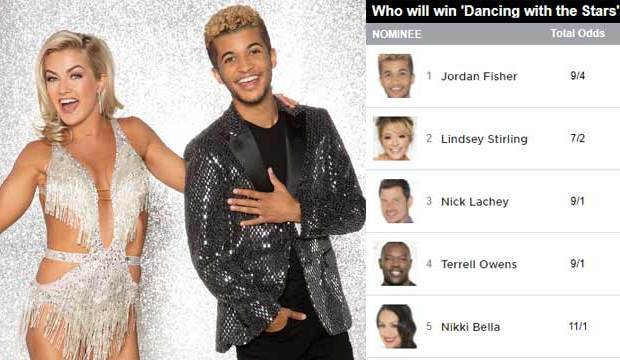 Gold Derby’s readers have been predicting who will win season 25 of “Dancing with the Stars” since the celebrity cast was announced on September 6, and though it’s hard to make definitive judgments before anyone has entered the ballroom, we think we have a good idea of who’s got the inside track. As of this writing, Broadway and Disney Channel star Jordan Fisher is the man to beat with leading odds of 9/4, which translates to a 31% chance of winning the Mirror Ball Trophy.

But just how accurate are our week-one predictions usually? Do our early favorites always go on to prevail? Well, in season 20 gymnast Nastia Liukin was the heavy favorite, but she ended up finishing fourth, while the eventual winner, Rumer Willis, started our predictions in fourth place. Then in season 21 we gave the early advantage to Alexa PenaVega, but we were way off there: PenaVega finished sixth, while Bindi Irwin (who started our predictions in third), ended up winning.

Football player Antonio Brown had the early edge to win season 22, but alas he also came up short, finishing fourth, while our initial fourth place contender Nyle DiMarco won the Mirror Ball. But we nailed our week-one predictions in season 23: gymnast Laurie Hernandez was the favorite from the get-go, and she never looked back. However, season 24 took us the most by surprise. We thought Hernandez’s Olympic teammate Simone Biles would win, but she was unexpectedly eliminated in fourth place. The contestant who won, Rashad Jennings, wasn’t predicted by any of our users in the first week.

So our season-premiere predictions don’t always pan out, but it’s worth noting that, with the exception of Jennings last season, the winners have typically been in our top four from the very beginning. So this year that could be good news for violinist Lindsey Stirling, who currently ranks second with 7/2 odds (21% chance of winning); singer Nick Lachey, who is third with 9/1 odds (10% chance of winning); and football star Terrell Owens, who also has 9/1 odds (10% chance of winning). So recent history indicates that Fisher may or may not hold on to his frontrunner status, but that the ultimate Mirror Ball champ could very well come from that top four.

It’s still anyone’s game, though. Click on the graph below for more detailed stats about tonight’s “DWTS” season premiere episode.

PREDICT‘Dancing with the Stars’ now; change them until September 18