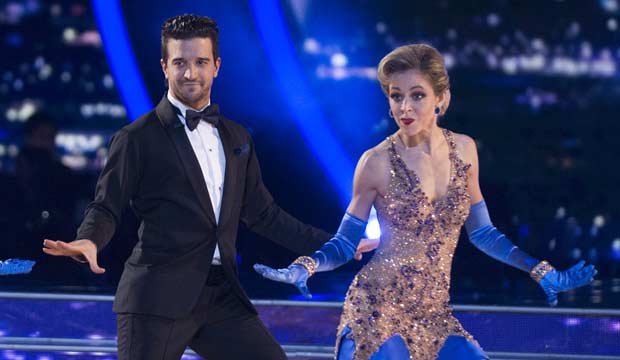 We’re one week shy of the “Dancing with the Stars” season 25 finale. Which of the remaining five couples will be left behind? One can assume that both Jordan Fisher and Lindsey Stirling are locks for two of those spots based on their high scores this season. And although he hasn’t been as consistent as Jordan or Lindsey, I would also consider Frankie Muniz a strong contender for the finals as well.

That leaves Drew Scott and Victoria Arlen to duke it out for the last spot in next week’s show. Will Drew’s charm help him advance, or will Victoria’s inspirational story be enough for her to claim the last spot? This and more will be revealed tonight in the ninth week of the competition. Each couple will perform two routines: one dance in a previously unlearned style and one “iconic” dance recreating a famous routine performed in a previous season.

Will the semifinals once again show that Jordan deserves the Mirror Ball Trophy? Or will Lindsey prove that she still shouldn’t be counted out? Might both Drew and Victoria make it to the finals, resulting in a surprise elimination? And who will live up to the “iconic” dances in “DWTS” history? Check out my predictions below.

Iconic Dance (Amber Riley & Derek Hough): Charleston (“Bang Bang” by Will I. Am)

The judges were mixed on both of Victoria’s routines last week on “Trio Night.” While her Argentine tango showed us a sexier side of her, it lacked technique and passion. Then her jive trio with Laurie Hernandez was the weakest in that round of competition. In order for Victoria to be a viable contender for the Mirror Ball, she needs to knock both of her routines out of the park tonight. I expect to see her scores bump up with her waltz; Victoria shines with lyrical and traditional routines. As for the iconic dance, I think we’ll see her struggle a bit as she proved in her jive last week that uptempo dances are a bit tougher for her.

Jordan finished week eight back on top with two perfect routines. But part of me feels that the judges have yet to deliver any harsh criticism to him and they might think he’s due for some nitpicking. Plus I doubt that they would want him to have perfect nights two weeks in a row. While I think his Argentine tango will be nothing short of amazing, I can see Carrie Ann or Len finding something to fault in the routine. Regarding the jive, I’m sure without a doubt that Jordan will not only kill it, but that it will become an iconic routine itself.

After earning a perfect 60 out of 60 in week seven, “Halloween Night,” Frankie and Witney were unable to capture that same magic last week. And now Frankie has two dance styles that might be a bit difficult for him. First up for Frankie and Witney is a salsa routine. Frankie has been hit-or-miss with fast-tempo Latin routines. His cha cha was entertaining and earned him the highest score of the season at the time back in week two, while his samba proved to be one of his lowest scoring dances in week three. Honestly, I think he’ll manage to perform a solid salsa routine. Regarding the paso doble, I’m curious to see how Frankie will pull of the masculine and powerful movements of this dance. I have confidence that he can pull this off, but I could see this potentially being a bit of a mess. Right now, I’ll lean towards it being great.

SEE‘Dancing with the Stars’: Top 10 BEST Pro Dancers Ever

For the second time in three weeks Drew and Emma are dead last on the leaderboard. With their backs against the wall again, will they have enough support to make it to the finals? The judges could either be nice and give Drew higher marks this week, especially if they think he’ll be eliminated anyway, or they’ll continue to harshly criticize him. I think Drew will do well with his tango routine, as he has a good track record with dances that require proper frame and hold. Regarding the jazz routine, I can see Emma being strategic and incorporating several moves from their high-scoring “Halloween” Charleston. I think this will be a solid night for Drew and Emma.

Lindsey continues to deliver the goods but has yet to have a perfect night like her competitors Frankie Muniz and Jordan Fisher. Based on the dance styles she has this week, I’m fairly confident that Lindsey will be the one with two perfect scores. For the first round she and Mark will dance a contemporary routine to a song performed by Mark’s wife, Alexandra Jean. This dance will likely be full of lyrical movements, beautiful storytelling, and amazing choreography from Mark. For their iconic dance, they will be taking a tango made famous by season 18’s champions Meryl Davis and Maksim Chmerkovskiy. Out of all the iconic dances, they have the toughest act to follow. But I think this would be the perfect routine for them to end on a week before the finals.