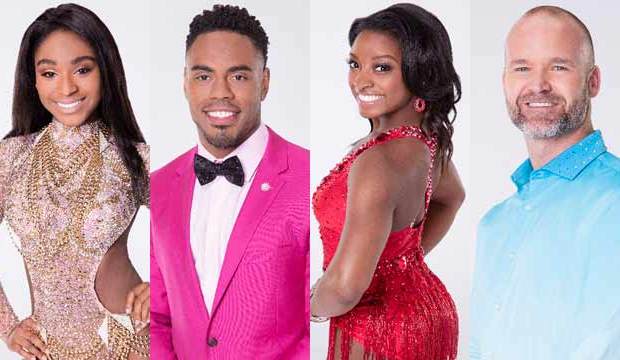 Remember week six of “Dancing with the Stars”? The judges had been hard on Heather Morris the previous week, but came around and gave her a perfect score for her rumba — but it was too little too late. The criticisms and scores from the previous week doomed Morris to one of the show’s most shocking eliminations once those scores were combined with viewer votes.

Cut to this week’s “DWTS” semifinals. The judges were hard on Simone Biles last week, but came around and gave her a perfect score for her rumba, as well as a perfect score for her jive — but it was too little too late. The criticisms and scores from last week doomed Biles to another one of the show’s most shocking eliminations once those scores were combined with viewer votes.

That’s right, the three celebs advancing to next week’s finals are singer Normani Kordei and football player Rashad Jennings, as expected, along with baseball player David Ross, who was decidedly not expected. Ross had overwhelming 1/4 odds of being eliminated based on the predictions of our users who entered their picks at Gold Derby, which translated to a 79% chance of being sent home. A little more than a handful of our users foresaw Biles’s shocking elimination. She had 12/1 odds, or an 8% chance of going home early.

But Biles finished second to last on the judges’ leaderboard last week. That made her highly vulnerable against Ross, who finished below her but had already proven his ability to overcome low scores with viewer votes. With that in mind, and considering the eerie parallels with Heather Morris, perhaps we all should have seen this coming.

Our predictions were more accurate when it came to the other two results of the night. Most of us were correct that Ross would get the lowest score (2/13 odds, 89% chance), and that the judges would give out 10 or more perfect 10s (2/3 odds, 58% chance). But where do our predictions stand going into next week’s finals? For seven full weeks of competition Biles was our favorite to win, and even after Kordei overtook her as Mirror Ball frontrunner Biles was still a force to be reckoned with, as she proved during these semifinals.

In our weekly predictions contest, no users managed to score a perfect 100%, but nine had 75% accuracy by correctly answering three out of our four prediction questions: who would get the high score (Biles), who would get the low score (Ross), who would be eliminated (Biles), and how many 10s the judges would give out (10 or more). Those users were michaelmarill, Opal Diamond, jeredshaffer, Jubilee Diamond, Amfamy, Adam, zkrons, grisha grigorov and Nate.

Michaelmarill takes first place on our predictions leaderboard because he took advantage of his big bets to score the maximum payout. He placed his 500-point big bets on David Ross’s low score and 10 or more perfect 10s when both of those outcomes had 2/1, which resulted in a combined 3,000 points added to his score.

Check out the top 10 users in our predictions chart below. Click on the chart to see the complete predictions leaderboard so you can find out how well you did. What did you think of the “Dancing with the Stars” semifinals? Next week are the finals, the end of the road for the remaining three celeb contestants, so the competition will be more demanding than ever. You can already make your predictions for next week here. Answer the following questions before next week’s episode airs on ABC on Monday at 5 p.m. PT / 8 p.m. ET.:

Who will win “Dancing with the Stars”?

Who will finish 2nd on “Dancing with the Stars”?

Who will finish 3rd on “Dancing with the Stars”

Who will get the HIGHEST judges’ score?

Who will get the LOWEST judges’ score?

Top 10 WORST ‘Dancing with the Stars’ Contestants Ever

Before you make your predictions, make sure to consult the judges’ scores from tonight’s episode, which along with viewer votes will determine the results: