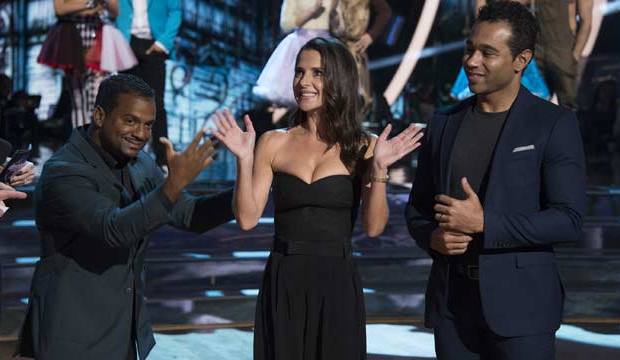 After a shocking double elimination on “Halloween Night,” “Dancing with the Stars” is down to its final six competitors, who will perform two routines in next Monday’s episode, an individual routine and a trio dance that will incorporate the celebrity, their pro dancer, and a guest partner. Usually that guest partner is another professional or troupe dancer, but this season there’s a twist: “DWTS” is inviting back former contestants.

Host Tom Bergeron announced that shakeup on “Halloween Night” and revealed three of the past contestants who will be competing in the special trio dances: the very first Mirror Ball Champion Kelly Monaco, season 19 winner Alfonso Ribeiro, and season 17 runner-up Corbin Bleu. Then People Magazine announced the remaining alums. On top of that, they announced who those alums would be dancing with.

The last two Mirror Ball champions will be back in the ballroom. Season 24 victor Rashad Jennings will rejoin his former pro partner Emma Slater and her current celeb Drew Scott. Season 23 winner Laurie Hernandez will reunite with her pro Val Chmerkovskiy and his current partner Victoria Arlen. And there will be yet another reunion, between season six winner Kristi Yamaguchi and her former pro Mark Ballas with his celeb Lindsey Stirling, who will hopefully be well enough to perform after struggling through a rib injury during the Halloween episode.

As for the guests who were already announced, Ribeiro will be re-teaming with Witney Carson and her celeb Frankie Muniz. Bleu will be joining his fellow Disney Channel alum Jordan Fisher and Lindsay Arnold. And Monaco will hit the dance floor with Terrell Owens and Cheryl Burke. Bleu and Monaco are the only returning “DWTS” alums who won’t be performing again with a past partner; might that be a disadvantage against trios with more established chemistry? See the complete list below. Who do you think will succeed?